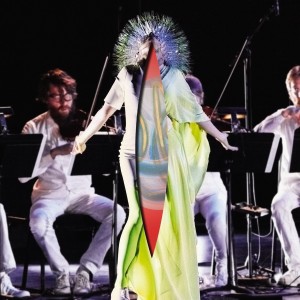 Orchestral strings always seem to go rather well with heartache. Arguably the first ever break-up album, Frank Sinatra‘s In The Wee Small Hours Of The Morning, saw Nelson Riddle’s arrangements have as much of an emotional impact as Ole Blue Eyes’ voice. On Beck‘s finest moment, Sea Change, his father David Campbell was responsible for some desperately sad string arrangements. And on one of the great lost albums of the ’80s, Everything But The Girl‘s Baby The Stars Shine Bright, the presence of a full string orchestra was the perfect accompaniment to Tracey Thorn’s mournful vocals.

It’s hard not to argue though, that Björk‘s most recent album didn’t really need any more heartbreak adding to it. Vulnicura was one of her finest albums to date, but also one of her most hard to listen records. You could almost feel the heartbreak pulsating out of the songs, you could definitely hear the pain in her voice when she sang lines like Lionsong’s “Maybe he will come out of this loving me…”. So, in a very Björk-like move, she’s decided to remake the album in the only way that she knows how – make it more intense, more sorrowful, and even more hard to listen to.

And, predictably enough, the results are pretty brilliant. Vulnicura Strings is, as the title suggests, all the songs on Vulnicara with the electronics stripped out, and redone with strings and vocals. The track listing has also been rejigged (and it’s been altered yet again for the vinyl version), and on some occasions, instrumental versions have been included instead. And, perhaps tellingly, there’s no sign at all of the original album’s happiest moment, History Of Touches.

It’s a fascinating experiment, and it’s certainly one that benefits from immersive listening, an album that suits a long, dark night of the soul with headphones and a glass of whiskey to hand. There’s an eerie, uneasy feel to Mouth Mantra, which opens Vulnicura Strings – the swaying strings creating the same portentous atmosphere that PJ Harvey‘s Man Size Sextet once managed. Björk’s vocals are multi-tracked and overlapped, adding to the weirdly disorientating feel of the song.

Lionheart is the one song that retains its original position in the tracklisting, and remains probably Vulnicura’s most accessible and emotional track, the ache and yearning in Björk’s voice even more accentuated by the strings-only backing. It seems unfair to compare the different versions of the songs, as part of the skill of this album is transforming the string-only versions into their own entities.

However, Stonemilker certainly benefits from its more stripped down version, placing more emphasis on Björk’s typically extraordinary vocals (the moment where she sings “moments of clarity are so rare”, actually rolling her ‘r’s is genuinely spine-tingling), and Notget is almost unbearably intense, the strings nearly stabbing into your heart as the crescendo rises and rises. Some may find the 10 minute long Black Lake a bit too much like hard work – like the rest of the album, it’s certainly not made for background listening, and it can be rather bleak at times, while Family is probably the most radically different rearrangement on the album.

For the latter, all of Björk’s vocals have been stripped out – so, where on the album, she’d hold a note for nearly 30 seconds, here it’s the instrument’s job to create that sound. It begins like an orchestra warming up, and then seems to go on for an almost interminable length of time: slowly, the drone begins to take a life of its own and becomes mysteriously hypnotic, even cathartic in a way. Then, suddenly, the melody kicks in, and the sense of release is palpable: before the drone begins again. It’s a beautiful arrangement, in it’s own very weird way.

Vulnicura Strings probably isn’t an album you’d want to listen to much on a regular basis, despite its undeniable excellence. It does, however, make for a beautiful and fascinating companion album to one of the year’s very best records. For Björk’s own sake though, let’s hope she never has to make a similar album.