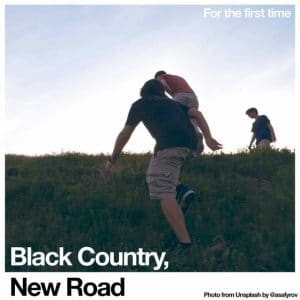 Black Country, New Road’s debut album is at last released into the world, so tell the band, especially permanently quivering lyricist Isaac Wood, that they can now unclench their jaws and chill out. The content appears to justify the considerable pre-release hype, for this collection of reworked post-rock singles and standout live tracks all sound fantastic, thanks be to Andy Savours the producer, mixer, engineer, recorder or whatever you wanna call him. He made albums with Blonde Redhead and Yeah Yeah Yeahs before this – also that My Bloody Valentine comeback album that Kevin Shields just won’t upload to Spotify – so he was an inspired choice. The artwork feels just sincere enough too, especially how it conservatively mirrors that Ryan McGinley shot that Sigur Rós used.

Instrumental was definitely the right choice for first song. It does exactly what it says on the tin. Five and a half minutes of Steve Albini inspired beta blocked free jazz tautology, where brusque pommeling drums start off imitating that manic beatnik intro from the old Ren & Stimpy cartoons, before playing a game of feral cat and mouse with sub-Saharan cellphone jams. Feet nailed to the floor, it goes all over the place and nowhere at once.

There are a few noticeable changes to the album version of debut single Athen’s, France though. It’s filled out a little and they’ve removed a lot of Isaac’s vocal tics. The profanities of the original have all been scrubbed, and any line that might have invited accusations of misogyny or exploitation has been plastered over with self deprecating references to their sudden fame and how historic indiscretions will haunt them forever thanks to the internet. Perhaps it’s why the original has been taken down from social media.

They reference 2018 specifically, and the spectre of sexual misconduct allegations that brought down their previous group Nervous Conditions that year looms omnipresent, something they’d felt uneasy addressing before. Rather than going for revisionism or denial, BC, NR are grappling with the dreaded responsibility of accountability. The descriptive vocabulary used on Sunglasses has also undergone some alterations: Big Pharma is now a pig farmer, and again the swears have been erased. There are no carnal demands from the emotionally stunted, only stabs at amicable closure.

The psychedelic sandblast of Track X recalls Lift To Experience with its tumbleweed riffing and semi religious thematics. Fans wet behind the ears will no doubt claim the group as postmodern icons for the rhetorical mentions of contemporaries Jerskin Fendrix and Black Midi sung to a former lover, but as well as it’s practiced, it’s a contrivance: Peter Sarstedt sang his ex’s collection of Rolling Stones records, and Nina Simone happily threw shade at her baby and Liberace.

So they’re maybe not reinventing the wheel here as many would like to suggest, but eight minute closer Opus, with its genteel Bruce Springsteen mockery and lyrics about owning their mistakes and escaping their beloved Black Country, proves that the Cambridge-via-London six-piece have overcome the numerous barriers they faced, the hurdles and traps set by themselves, fans and the ravenous media, and will continue to do so. Its auto-destructive last line of “What we built must fall to the rising flames” confirms that sacred cows must be destroyed in order to prevent false praise for unworthy deities. Black Country, New Road are no gods, but this inventive and likeable album should earn them a million or so disciples.