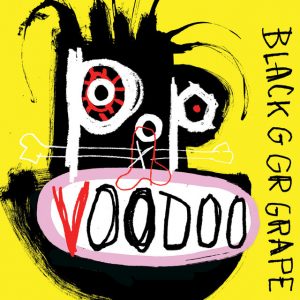 Having recently seen Ride, Slowdive and The Jesus And Mary Chain reappear with unexpected new albums after significant absences, perhaps the biggest surprise of all has been the re-emergence of Salford’s Black Grape.

Against all odds following court battles (Shaun Ryder) and heart complications (Kermit), the two mainstays from the band reconnected to pursue new ideas, and after a suggestion by Alan McGee, ex-Killing Joke bassist Martin Glover (Youth) came in on production for third album Pop Voodoo. Ryder couldn’t contain his delight at having Youth on board, calling him a “hit-maker” – fully justified considering his success with The Verve and Embrace plus numerous other more recent outings. It could be said that he’s had his fingers in more pies than Billy Bunter.

By way of dealing with tax bills (with his runner-up appearance on I’m A Celebrity… in 2010) and adding his voice to Manchester’s Metrolink trams for BBC Music Day this year, Ryder has never been far from the spotlight, but Kermit’s return to health and work is more surprising – and welcome – for a collection that Ryder has claimed “has no filler” and is “better than the first album”. The debut It’s Great When You’re Straight… Yeah! topped the UK charts in 1995, so this is quite a statement.

When the new album Pop Voodoo was announced in early May, it was accompanied by a new teaser track, Everything You Know Is Wrong – Intro, which opens the album. A bombastic lyrical assault is the best way to describe it, with US President Donald Trump taking both barrels full on whilst Hillary Clinton also gets some emails-related airtime. After the derogatory verbal attack, lyrics for the remainder of the collection veer between sleazy at best and vile at worst. But would you want Ryder any other way?

With Youth playing just about every musical instrument, the funk vibe from old Black Grape records has been given an added boost and is stamped all over the record. Nine Lives is insanely catchy, an instant hit of adrenalin, its brass-synth tinges marking out another characteristic of the LP. Set The Grass On Fire continues in the same vein with a trace of ska appearing during verses, although lyrics of “you gotta keep out of my personal space, everywhere I go you’re in my… personal face” enough to have you smirking/squirming/tutting or whatever – but it really doesn’t matter.

The misty, smoky bar vibe – at least until smoking was banned in pubs 10 years ago of Whiskey, Wine And Ham slows things down briefly before the brilliant Money Burns belts out a repetitive, infectiously moody beat and bassline for a touch of classy sleaze, if such a thing exists. Cock references (sigh) raise their heads during another highlight String Theory, and the only strings here are of the banjo variety, relying on a heavily repeated harmonica hook. The title track doesn’t quite match up in terms of likely longevity, with a particularly basic chorus likely to annoy within just a few plays but the cool, funky beat of Sugar Money is another winner, as is the irresistible ‘nothing to do with The Jungle Book’ I Wanna Be Like You that plays out something like Smash Mouth’s All Star as performed by Fun Lovin’ Criminals, with lyrics telling of a 74-year-old still smoking weed – a premonition of the future Mr Ryder himself, perhaps?

The final three tracks, however, don’t quite live up to much of what’s gone before. Losing Sleep is the best of the three, with some excellent – although tempered – guitaring featuring on a track that sounds a little like a poor cousin of Happy Mondays’ Loose Fit, but Shame’s brass hook and bouncy beat coupled with laughable distant backing lyrics of “yeah they’re all the fuckin same” are mundane at best. Closing track Young And Dumb – remarkably the same name Cigarettes After Sex gave to their own controversial fellatio-quoting closing track from their recent debut album – provides the biggest dollop of sleaze, incorporating a rap/hip-hop influenced lyric of “young, dumb and full of cum” into another lazy ‘lurking in the shadows of a nightclub’ cut.

Aside from the, at times, laughable spiel spat by Ryder, there is one over-riding conclusion to take from Pop Voodoo – it is irrefutably “catchy as fuck”, as Ryder himself would no doubt say. You might cringe at some of the words, and you certainly wouldn’t play them to your young kids or their elderly nanna, but everyone in-between might just turn enough of a blind eye and enjoy Pop Voodoo for what it fundamentally is: an enjoyable trip of danceable funk.