by Graeme Marsh
published: 11 May 2014 in Album Reviews
Tweet 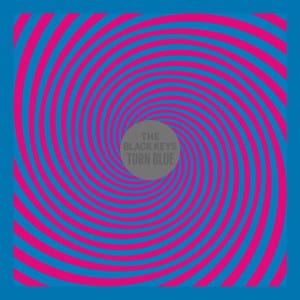 Cries of ‘sell out’ could be heard everywhere following the release of El Camino in 2011, with The Black Keys’ staunchest fans the band’s loudest critics as Dan Auerbach and Patrick Carney deviated from the soulful blues rock of earlier albums.

The band’s most commercially successful work was more down to evolution than purposeful channelling of their sound towards a larger audience though, despite co-producer Danger Mouse’s presence. But now Brian Burton’s input has increased substantially, subsequently shaping much of eighth studio album Turn Blue with his latest production and keyboard contributions both being far more considerable than before.

Fever was the first new track to surface, a crazily addictive cheesy synth melody (that surely represents the first major debt to Burton) being at the nucleus of an impressive cut that unsurprisingly sounds a lot like another recent Burton project (with The Shins’ James Mercer), Broken Bells; it’s… just… so… damn… catchy.

The album opens to an absolute monster, Weight Of Your Love. Almost touching seven minutes in length, the epic track begins to a captivating two minute instrumental intro that sounds like a long lost ‘70s rock colossus, with Auerbach’s brilliant guitaring surpassing most, if not all, his guitar work from his career to date. It’s a sprawling, writhing beast of quiet bass-plucked passages entwining with thunderous rock sections that boast some incredible soloing amidst constant ticking percussion; a slow-burning gem approaching stoner rock territory. The band’s best ever track? Debatable, but some will say yes.

And strong tracks keep on coming: the excellent In Time steps up next – a memorable, bluesy guitar riff that will fleetingly keep some of those anti-‘new’ Black Keys critics at bay marries with falsetto vocals and a catchy beat, with superb touches of guitar riffage furnishing the backdrop. It’s another massive track, classic Black Keys with early blues leanings present whilst the newer synth sounds of the chorus providing nothing but improvements on an old model.

Then there’s the title track, another pre-album release number, its sultry, slow burning smoky blues-riff forming the backbone of the song amidst purring percussion – pure class. Year In Review is more simplistic, more guitaring occasionally at the forefront throughout as Auerbach flexes his muscles like never before whilst hushed, angelic backing vocals create a lush texture. Bullet In The Brain is another belter, starting off like another lost ‘70s rock epic before morphing into something more electronic as Burton’s input moulds the duo’s primal sound into something bigger, a swirling soundscape that twists and turns via Burton’s weaving synth lines.

It’s Up To You Now is a pace changer, veering from slow, blues-guitar riffing to faster, tribal drum-backed sections; it’s a groovy number that once more nods towards the ‘70s with its chopping, punchy tribal rhythm. Waiting On Words blends wispy, dreamy vocals with a simple guitar riff and acoustic strummings as another Broken Bells’ likeness is formed along with the addition of the blues aspect. 10 Lovers then continues the trend and wouldn’t have looked amiss on this year’s After The Disco, its cheesy synth melody being just… so… damn… catchy before a burst of guitaring genius completes the song.

In Our Prime opens to the unlikely sound of piano as a Pink Floyd like cut appears, more brilliant reverb-heavy bluesy guitar soloing melding with organ as a psychedelic flavour takes shape; Gotta Get Away then closes the album in style – it’s a jaunty rocker that sounds like The Faces (less Rod Stewart’s gravely vocals) jamming with Creedence Clearwater Revival (less John Fogerty’s gravely vocals).

Auerbach’s familiar echo-drenched vocals are still evident but there’s little else remaining from the band’s earliest guise, but who cares when evolution is this good? And that’s what needs to be appreciated – would those early albums still retain such a place in fans’ hearts if The Black Keys had stuck to the same formula for all eight albums? Unlikely. Turn Blue is a melting pot of brilliance that makes you wonder why they chose to perform Gold On The Ceiling on a recent Later… With Jools Holland show – just about any of these songs would have wowed the audience considerably more than an older one.

This is another step along that path of evolution destined to appear on end of year best album lists, and (ducks from those crazed blues-starved fans of old) it’s quite possibly The Black Keys’ own best ever long player. It’s… just… so… damn… catchy.