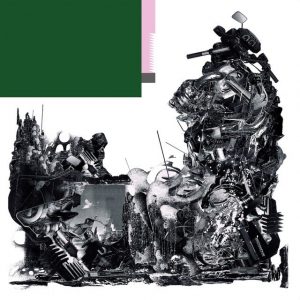 Adele, Jessie J and Amy Winehouse are amongst a host of stars to have already emerged from Croydon’s BRIT School For Performing Arts and Technology, but the school’s latest alumni in the spotlight are nothing like what’s gone before. Black Midi, consisting of Geordie Greep (vocals, guitar), Matt Kwasniewski-Kelvin (vocals, guitar), Morgan Simpson (drums) and the final addition Cameron Picton (vocals, bass) – who, in true rock n’ roll style, joined the band on the morning of their first ever live performance with little rehearsal time left – have seen journalists struggling to pigeonhole them since their formation, but it’s mission impossible as a truckload of genre references pop up, only to disappear as quickly as they came.

Fascination with the band by what seems like the entire music industry might never have happened had it not been for The Windmill pub/music venue in Brixton. Greep had emailed “every venue in London” asking for a gig and The Windmill’s was the only response he received, thanks to the venue’s event booker Tim Perry. A residency was quickly offered to the boys – all staggeringly still under 21 we should add – and the catalyst was set for a cult to grow, their tiny shows ranging from ones briefly beginning with what could be perceived to be a piss-taking blues number to one where they all decided to learn new instruments during another. It was at the first night of residency that famed producer Dan Carey spotted them, quickly asking to work with them as he spotted something very special, and debut album Schlagenheim is the result.

Make no mistake, these lads are extremely talented, perhaps none more so than Simpson whose drumming is likely to be on a par with anything you’ve ever come across before – you need to see it to believe it. And it’s not only blues they seem capable of mimicking; you could probably ask them to perform any number in any given style, and they give every impression of being able to knock it out. Take Reggae for example, a track lifted from the new album; it’s nothing like reggae of course, choosing instead to bounce between minimalist patches and brief touches of math rock, which is one pigeonhole Black Midi have been pushed towards.

Most tracks are fragmented in such a way that the best description is probably ‘controlled chaos’. Opener 953 stumbles its way into life after jagged, raucous guitars herald its arrival before things settle down beautifully in minimalist fashion, but then the great divider appears – Greep’s vocals. You’ll either love them or hate them, but at this point you’re dumbfounded as your brain cells search for reference points, perhaps wondering if The League Of Gentleman’s Papa Lazarou has started a Royston Vasey band. The track continues, bouncing between quieter passages accompanied by Greep and heavy ‘balls out’ moments of thunderous noise before the track races off at breakneck speed, then slowly grinds to a halt before wheezing out one last breath of angst.

A repetitive note punches away during Speedway amongst monotone vocals, but here you do little else but sit back and wonder at an example of Simpson’s truly staggering percussion. The short, sharp near DT MI might contain too much tortured insanity, along with Years Ago, but single Bmbmbm will fascinate as a Nikki Grahame (Big Brother) voice sample screams part-muted from behind a slow, bouncing cut topped by Greep’s best impression of a raving lunatic.

The band’s best tracks, though, enjoy longer gestation periods. The eight-minute Western is bookended by quieter passages with finger-picked guitar likely to ring ‘prog rock’ bells, the more serene moments giving Greep’s truly captivating vocals more room to breathe as the track holds together much better for those yearning for conventional song structures. It doesn’t get anywhere near a conventional song structure to be fair, but it’s far less fragmented, feeling like the mirror has only shattered in a few places this time rather than just about everywhere.

At six minutes, Of Schlagenheim also depicts a whiff of prog rock, acting as a kind of microcosm for the band as a whole as fluctuating time signatures wrestle with erratic yet compellingly brilliant musicianship. Another six-minute effort closes the album, Ducter, and like all the album’s best tracks it manages to navigate all the band’s best checkpoints of note, showcasing those spellbinding vocals and extraordinary percussion as they tread a truly staggering path.

Schlagenheim will open up a whole new bottle of weird, if you let it in. It’s Troutmask Replica for a new generation, or perhaps it’s Can attempting to recreate the madness that Captain Beefheart’s enigmatic classic contained, although in reality it defies description and just simply needs to be heard. Indeed, it’s a modern day classic in itself, but not one that contains nine hit singles destined for radio glory – you’re unlikely to see anything from these BRIT boys topping the UK singles chart like their Croydon school precursors. Instead, Schlagenheim must be heralded as the dawn of a new era in a music scene crying out for a fresh injection of life.