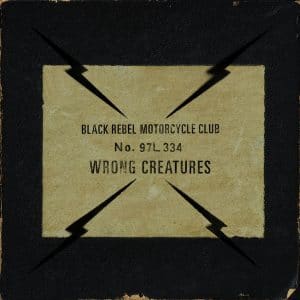 If nothing else, you have to admire Black Rebel Motorcycle Club’s resilience. It’s easy to keep to a path when everyone is telling you ‘you’re great, this sounds amazing, you’re so totally in vogue’ and a lot harder when the response is derision or, worse, silence.

Sure, they’ve taken some diversions along the way – the acoustic Howl, the formless noise of The Effect Of 333 – but they’ve always come back. If you were the cynical sort you could argue that given the cyclic nature of fads and fashions, standing still at this point is probably amongst the best things they could do. Surely we must be due another raft of bands noting Jim and William Reid as their key reference points, if for no other reason than the litany of ‘resurrection‘ jokes it could give rise to.

So as health warnings go, asking people not to approach Wrong Creatures expecting anything wildly different is about on the level of warning people that the Superman cape they’ve just purchased does not allow them to fly. Nigh-on 20 years since they emerged, black of heart, fuzzy of chord and rhetorical of question, Wrong Creatures remains hewn from a familiar seam.

Which isn’t necessarily a criticism. Actually, you could make a strong case for this being the best BRMC album BRMC have made for quite a while.

Spook – chords echoing in what is probably a cold wind, ominous mutters of “Death song cities” sneered conspiratorially, chorus overdriven on a relentless beat – is tremendous. Ninth Configuration, once it’s got going – which, bearing in mind that it’s almost seven minutes long, takes longer than it could – sounds like a punch-drunk Sweet Child O’ Mine that’s gone 15 rounds with Jason Pierce. It’s kind of absurd, but kind of likeable.

But if anything, it’s the quieter moments that are Wrong Creatures’ best. Haunt dials back the reverb, turns up the heartfelt emotion and makes something genuine and Echo allows Robert Been to take a walk on the Herbie Flowers side, before the song crests into a euphoric crescendo. Like a few things on Wrong Creatures, it could be ridiculous, if wasn’t done so deftly and with such unshakable belief.

There are bits when that doesn’t hold. Little Things Gone Wild is BRMC paint-by-numbers, which given the monochromatic hue to their palette is a little rote. King Of Bones is all revved up with nowhere to go, while Calling Them All Way takes the ayahuasca drinking, freak-out spirituality too far. Weird drones throb and moan, the fog speckled with multi-tracked voices and filagrees of picked notes, before the end of the song floats into view and you wonder why they’ve become U2.