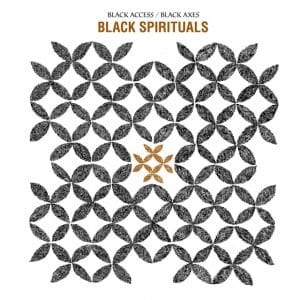 Black Access/Black Axes marks the last record that guitarist Zachary James Watkins and drummer Marshall Trammell intend to make together. Although Watkins envisages carrying on with the Black Spirituals name, this latest offering will be their final communiqué as a duo, and with it, they have made their boldest music to date.

From their formation in 2012 Black Spirituals have made genre-evasive music and their latest continues to erode the dividing lines of classification. At times you can detect traces of free-form jazz, at others psych rock, not to mention drone, and often the music feels heavily psychedelic.

Sometimes the record combines all those and more like it were nothing at all exploding all sense of genre entirely. Equally, their intent to create music that is both improvised and choreographed is keenly felt in the resulting work without disturbing the meditative, hypnotic flow.

Black Access/Black Axes presents tension and release as the improvised meets the spontaneous. The music builds and crumbles, binds itself tightly only to liberate that stored energy in often breathtaking ways. Dissension features clattering jazz-like rhythms, reaching guitar lines, and similarly on Inference, Watkins’ distorted guitar sounds like it’s calling out across a void of scorched earth.

Trammell’s drumming feels instinctual, and Watkins’ guitar playing deeply soulful, which combine to make for an intoxicating mix. And mix it up they do. Whereas Want is a sparsely ambient soundscape, in contrast, Demic’s chaotic ruckus is a maximalist brew. All the while their experimentalism feels less like a cerebral act than it does an emphatically emotional venture.

And so the duo’s partnership ends with this, their grandest statement. While its finality, as the probable apotheosis of this wonderful collaboration, is regretful, it’s also a fitting and fulfilling concluding chapter in what has proven to be an immensely rewarding alliance.