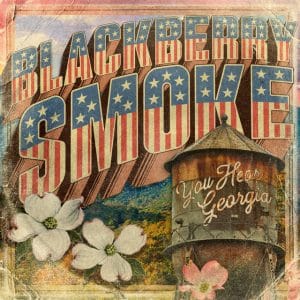 You may never have heard of Blackberry Smoke, but you’ll almost certainly have heard some of the bands people consider to be their influences and peers – Lynyrd Skynyrd, The Rolling Stones, Creedence Clearwater Revival, The Allman Brothers, Drive-By Truckers and many, many more.

They make the kind of soulful, greasy country rock that you just can’t find on these shores any more. Sure, they sound a little too close to The Black Crowes for comfort at times, but by and large this is about as sincere as music making gets in 2021. Their new album, You Hear Georgia, is a celebration of the band’s home, and the home of producer Dave Cobb, through 10 thick, groovy and wonderful tracks.

The first thing that might strike listeners coming to this band fresh is their commitment to live-in-the-studio production and honest mixing: you can actually hear the resonance from the snare drum loud and clear on the title track, for example. Blackberry Smoke’s is a living, breathing sound – and this is one of the primary successes of the album.

As well as the title track (a clear highlight), there are more than a handful of great tunes. When the band lean into the heavier side of their sound, as on All Rise Again (featuring longtime Allman Brothers lead guitarist Warren Haynes), they lose none of their limber, muscular rhythmic sensibilities. When they pick up the pace, as they do on All Over The Road, they stick firm to choppy barroom riffs that have graced albums from David Bowie to The Faces and pretty much any other classic rock band who’ve ever tried to get asses out of seats and feet on the floor.

Ain’t The Same is some more classic American rock music, evoking artists as disparate as Guns N’ Roses, Tom Petty & the Heartbreakers and even The Eagles, and it plays with the standard country rock tropes and refashions them into the kind of  highway rocker that has graced the stages of Bon Jovi and even Bruce Springsteen in the past 40 years. Not one hint of experimentation, and not one hint of irony – this is just superb rock music made in the only way they know how.

This isn’t revolutionary music, and hasn’t been for 50 years or so, but then nobody ever wants their comfort food to be cutting edge, or their pyjamas to be suitable for space exploration. This is a loose, careworn and ultimately comforting kind of music that’s made by musicians at the very apex of their chosen genre. Blackberry Smoke are the ultimate antidote to bad vibes, and You Hear Georgia is more than just escapist fun, it’s a superb record.