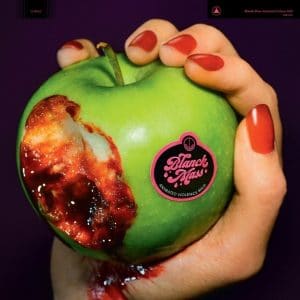 As formal genre and sub-genre structures become increasingly impractical in the internet-dominated 21st century, there are artists that revert to nostalgic sounds – seeking an ‘authentic’ geographic community to align themselves with – and artists that revel in the possibilities that the new world provides. Benjamin Power, also known as Blanck Mass, is an example of the latter, someone who has furrowed his own path and created a sound that is visceral, poppy and cinematic at the same time.

One of the heaviest tracks on Animated Violence Mild comes at the beginning, with Death Drop. A 6/8 groove is rattled out in impossibly intense percussion hits, sub-bass blasts, and distorted synths alternate with metal-style screaming. The energy level doesn’t let up for over seven minutes, and over time elements of this arrangement paradoxically start to feel distant, almost ambient. Across the album Power is no stranger to this form of minimalism, gathering together a few compositional ingredients and allowing them to emulsify over a lengthy song structure.

Vocal cut-ups are frequently thrown into the mix, their choppy rhythms sometimes mimicking the booming percussion and sometimes adding a counter-rhythm. The synth melodies that adorn so many of these tracks are an ode to dated euro-trance, as bright as neon and defiant in their garishness. On paper it seems questionable whether a combination like this could be sustained coherently over multiple tracks, but the songs here are much more than coherent. There’s power in their songcraft, a fascinating method in their seemingly chaotic arrangements, and a mesmerising quality in their grand, imposing, cavernous scale.

While most tracks are part of this aforementioned melange of rhythm and momentum, Creature/West Fuqua stands out as a beat-free come-down: its first half is an abrasive drone, with shimmering textures and fragments of melody surrounding it, but this gradually melts away to be replaced by samples of harp flourishes in the second half. These are arranged into a delicate sequence with a gentle 4×4 pulse underneath and then unassumingly fade to nothingness, an oasis of calm in the middle of what is at times a challenging album.

Elsewhere Love Is A Parasite makes its mark with dynamic stabs of tonality, pushing the track along to a plodding beat, and delves into an intriguingly Moby-esque chord sequence for its wandering middle section. No Dice incorporates what sounds like a stapler into its rhythmic framework while a synth bass purrs ominously, and House vs. House features tuneful reversed vocals alternating with those synth melodies, a warped mutation of a synth-pop song. At various points it becomes apparent that the driving, determined register of fantasy video game music is also an influence for Blanck Mass’ style, as heard in Hush Money’s extra-intense double-time sections, and Wings Of Hate closes proceedings on an especially frenetic note, that same ambient effect creeping in halfway through its cavalcade of noise.

Animated Violence Mild is for the most part antithetical to a chilled-out experience: if it were a visual display it would most likely trigger photosensitive epilepsy. But it is thrilling, a whirlwind of textures wrapped up in a relatively short run-time, with a sonic consistency that wasn’t always present in 2017’s World Eater. Blanck Mass’ style approaches speedcore in places, but Power ultimately creates music more nuanced and vivid than that genre label ever facilitated, and as such this album is highly recommended for all fans of experimental electronic music, as well as the noise and industrial side of things.