by Sam Shepherd
published: 11 May 2015 in Album Reviews
Tweet 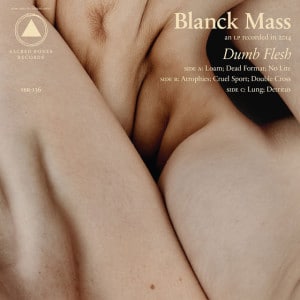 As one half of the much celebrated electronica/noise/drone/dance duo Fuck Buttons, Benjamin John Power is no stranger to the furthest reaches of the electro-landscape. His solo project Blanck Mass originally explored more ambient vistas to those inhabited by FB; preferring washes of sound and static to propulsive beats.

The debut album from Power’s solo endeavours felt like a distinct departure. Dumb Flesh is his second solo venture, but this time around, it would appear that the apple hasn’t fallen too far from the Fuck Buttons tree. Whilst there are still moments of quiet contemplation, they’re few and far between and Power appears to be concentrating primarily on power and hooks, in fact, so similar is this solo effort to his work with Andrew Hung that it is almost impossible to tell them apart.

Dead Format is a perfect case in point. There’s no messing about or nuance on show here at all, just turbo charged electro-thunder as Power goes lurches onto the dancefloor and goes straight for the jugular. In a similar vein is Double Cross, which pumps with aggressive menace whilst simultaneously foregrounding a keen pop-sensibility that in other hands might have been hidden under tides of squalling noise.

The apparently upbeat nature of both these tracks appears to be at odds with the themes of the album. Dumb Flesh is concerned with the shortcomings and frailties of the human body and how it can malfunction in spectacular (probably the wrong adjective) ways. So whilst Dead Format might encourage a hot and sweaty dancefloor, or Double cross may inspire procreation (because stranger things have happened), the central message apparently proposed by most of these tracks is “enjoy your hedonism while it lasts, because genetically, you’re screwed”.

Titles such as Atrophies, Lung, and Detritus point towards decay, disease and the organic nature of the body. Of course Matmos has covered such themes before, most notably on their album A Chance To Cut Is A Chance To Cure, which sampled plastic surgery procedures to create unnerving slabs of operating room floorfillers. There were times during that album where the searing flesh could be smelt and crunch of broken cartilage bought a lump to the throat, but there’s nothing quite so real or disturbing on show here.

Power’s instinct to keep things shaped for the dancefloor means that no matter how dark things should sound, they rarely venture into the realms of the disturbing. The most ominous the whole album gets is Cruel Sport, which seethes with a threatening undertow, but still can’t quite tear itself away from the need to keep things upbeat. As overbearing and intricate as it is, the urge to shake a (prosthetic) leg is never far away, and as dark sonic clouds gather, Power brings the thunder.

There are quieter moments of course, and Lung is about as chilled as it gets. Not quite ambient and not exactly chilled either, the skittering drums and shifting ominous bass pattern act bring a sense of menace to the swirling synths, as finally the sound of a woman in the throws of ecstacy and/or drowning add a sense of darkened ambiguity at the close. Closing track Detritus returns to the stadium sized sounds, sounding like an Eastern Bloc national anthem, but not before an introduction of static and noise brings a sense of oppression.

There are some fine moments here, but all too often Dumb Flesh seems like a diluted version of Fuck Buttons. That’s not to say that this is a poor record, far from it. But, good though it is, it feels like a missed opportunity to establish Blanck Mass’ individuality.