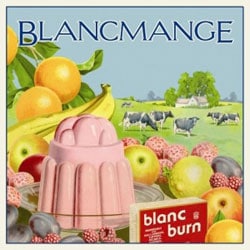 Just when you thought there were no more ’80s bands left to reunite, blast-from-the-past Blancmange drop a new record, over 25 years after their third and final album. For those too young to remember, Blancmange enjoyed a string of hits back in the day with synth pop melodies interweaved with Indian and African flavours.

The Harrow duo had thus far refused to jump on the nostalgia bandwagon (because nobody remembered them?), but then came along La Roux, clearly influenced by their sound, churning out ’80s synth pop tunes and turning back the musical clock. The timing was ideal for a reformation and resulted in new album Blanc Burn (a pun on singer Neil Arthur’s hometown of Blackburn).

Bathed in the hues of multiple genres, Blancmange’s classic sound remains unscathed, with the clear-cut Eastern echoes, sitars and analogue synths, alternating tempos and moods. While it’s hard to define, it’s certainly a moody album, one emotion segueing into another. Blanc Burn kicks off with the low-key By The Bus Stop @ Woolies, and from then on it’s a seesaw of atmospherics and emotions.

Musically it’s rich, even quite complex at times. Lyrically, Arthur recounts tales of the banalities of everyday life, sometimes with a dark wit, often in a narrative style; like some kind of caffeinated The Streets. Speaking of caffeine, I’m Having A Coffee is like a diary. Curiously, it works. But the caffeine really kicks in on the next track Don’t Let These Days, its upbeat rhythm being led by African percussions and synths. Radio Therapy is mellow enough to please new agers, while The Western, featuring Pandit Dinesh on percussion, clearly has their older fans in mind. It picks up where they left off over 25 years ago, revisiting their biggest hit Living On The Ceiling. And maybe that’s why it’s the best track on the album.

Arthur’s voice adds just as much atmosphere to the tracks as the embellished instrumentations of Stephen Luscombe, who describes his mate as “Cash meets Presley in cyberspace.” Indeed, nobody could ever sing “I’m up the bloody tree” quite as strappingly.

Beneath the seemingly trivial tales lie darker commentaries. Or maybe we’re just reading too much between the lines. But it’s tempting not to with tracks like WDYF (What Did You Find) or the reggae-tinged and facetious Don’t Forget Your Teeth: “I’ll get my coat/Don’t forget your teeth.” A metaphor, no doubt.

But the closing track is more conspicuous. One of the best – and best-titled – tracks, Starfucker offers an astute observation on today’s celebrity culture and the “mass hysteria” it provokes. “Stars are supernova models frozen without any of your troubles,” sings Arthur, before warning, “Starfucker, I’ll steer clear of you.”

The groundbreaking Living On The Ceiling, Blind Vision and That’s Love That It Is put them at the forefront of the synth pop movement, and Blancmange has not forgotten its ’80s roots. Yet the duo neither pretends to revisit its successful past nor claims a faux renaissance, instead opting for an honest, if solid, collection of songs.