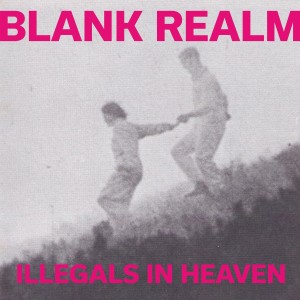 For a number of years now Australian music has been enjoying the purplest of purple patches. While bands like Tame Impala explore new psychedelic vistas, the more traditional indie rock quarter of Brisbane quarter Blank Realm have been carrying the flame for off kilter melodic indie rock to increasingly impressive effect.

The quarter of siblings Daniel, Luke and Sarah Spencer, as well as Luke Walsh, who together comprise Blank Realm have been a constantly compelling presence within the Australian indie rock scene of the last 10 years, releasing a string of resolutely lo-fi yet melodic albums on cassette and small underground labels. Illegals In Heaven is their fifth album, yet it is their first to be properly recorded in a studio. Even then, their stay in the environs of professional recording amounted to a single day in Brisbane with producer and Room 40 label founder Lawrence English. The ceding of lo-fi scrappiness in favour of a slightly more refined pop sheen gives the album a pleasing contrast between shiny and glistening melodic pop highs and frenetic, rudimentary noise rock thrills.

At the heart of Blank Realms music is an open hearted tenderness that features heavily here. Most of the songs reference the transcendent overpowering qualities of love and despair at some point. The glorious jangle pop rush of Palace Of Love is a wonderful case in point as singing drummer Daniel Spencer sings the nice line: “Locked in the palace of love, waiting for someone to pick me up.” It’s one of a number of lines that are instantly relatable on a record that is very easy to love.

Much of the sound of Illegals In Heaven is built around frenetic, hyperactive noise rock with a winning melody. A formula established by the likes of Sonic Youth so well in the ’80s, it’s a sound to which Blank Realm’s own is heavily indebted. But there’s certainly skill involved in the way that the frequently insidious top line guitar melodies are burnished with just enough feedback and distortion to not become overpowering. By the time we get to closing track Too Late Now, the guitar sounds move on to epic, dronier pastures, suggesting that Blank Realm’s sonic journey is still in its infancy.

Countering the wild eyed enthusiasm of the album’s most energised moments like the Sonic Youth Sister era-like opener No Views are two sublime tender ballads that provide a welcome and satisfying change of pace. Dream Date is a woozy, heartbreak lament that features some odd little intriguing rhyming couplets delivered by Daniel Spencer in his strung out, lonesome drawl: “When we get married we’ll drink coconut rum, and when we get married I won’t carry my gun.” Even better is the album’s standout track, Gold, on which Sarah Butler takes on the vocals on a gently graceful, brooding ballad that suggests Blank Realm have the ability to be far more than a noisy power pop band and possess more than enough songwriting chops to make genuinely affecting music.

For anyone well versed in underground indie rock, particularly the burgeoning Australian scene, Blank Realm were no secret. However, Illegals In Heaven is a refined and accomplished release that should see them reach a further new audience, and encourage them to perhaps enter that recording studio rather than the bedroom a little more often.