Bleeding Knees Club – Nothing To Do 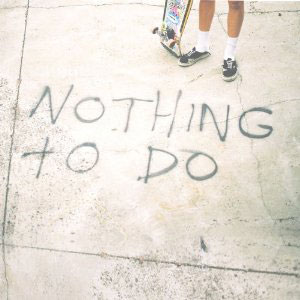 Alex Wall and Jordan Malane formed lo-fi outfit Bleeding Knees Club in early 2010. Native to Australia, their interests are those which are most stereotypical – surfing and skating – and which conjure up a sound in your mind before you’ve even heard the music. You’re waiting to hear something like Best Coast, The Drums, Wavves… and your chances of being disappointed are pretty much slim to none.

Their brand of lo-fi, surfer, punk rock has been permeating the music scene for a while now. It recalls the simple crooning of the fifties; makes use of the, well, beach-y feel of The Beach Boys; and has the imperfect vocals of early punk. If that punk was on the beach in Australia singing a mash up of God Save The Queen and Mr Sandman.

Nothing To Do, Bleeding Knees Club’s début, is produced by Dev Hynes (of Lightspeed Champion, Blood Orange and Test Icicles fame) and it’s not a bad first album; it’s just not a great one, either. It’s also going to be labelled, perhaps predictably, as a bit of a Marmite album. In fact, their whole sound is very Marmite.

While Best Coast have their soft, slurred female vocals and atmospheric guitar chords to add to the charm of their sunshine-slick music; or while The Drums have a muted, cushioned bass and a front-man with a low, Ian Curtis-esque voice; Bleeding Knees Club are notably lacking. That would be the punk element; the clawed voice, the quick rhythm guitar ripping out its riffs at sometimes breakneck speeds, and the clashing cymbals painting an erratic background to many of the songs.

On songs like Problem Child, this can become too much; it’s on numbers like this, and Who Are You, where the DIY noise can overcome the melodies and make the album difficult listening. It doesn’t help that for the first couple of plays it can feel like you’re listening to the same song on repeat throughout – it’s the very definition of a grower, in that until you start to get past the more offensive elements of the music, you can’t fully appreciate what Bleeding Knees Club are doing here.

Because they are doing something. It’s not groundbreaking and it’s not likely to burst this subset of music into the popular stratosphere (leave that to The Drums and Best Coast, who are far more palatable to the average listener), but it’s definitely interesting in its own way.

Stand-out tracks include Lipstick and Let It Go, both more on the ballad side. The former sounds as though it would have fitted in on the Grease soundtrack; while the latter sways into what for most will be more comfortable territory, without the energetic squawking of the earlier tracks. The vocals here are gentler (though not so much so that it no longer sounds like the same singer) and the pace slower, more like a calm day at the beach rather than a beach party.

Nothing To Do strikes a mixed tone, though. It’s too much of one thing, without enough of the other; while there’s that sense of the beach and surfer-skater society (see Lords of Dogtown, perhaps), there’s not enough of the buzzing nostalgia most crave within this kind of sound. Wall and Malane’s vocals can be harsh and unforgiving, and the melodies dense and difficult to pick apart, making this an often challenging record to listen to.