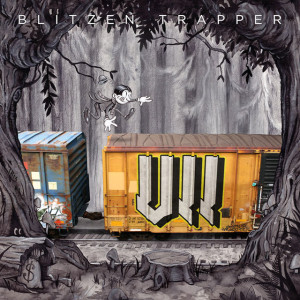 For a band who once, employed an unexpected and refreshing background synth line to the otherwise traditionally told Black River Killer, Blitzen Trapper’s recent efforts have just seemed so expected. After 2007’s excellent Wild Mountain Nation, 2008’s Furr, 2010’s Destroyer Of The Void and 2011’s especially disappointing American Goldwing saw the band trying to experiment, but falling into a sound, with no real desire to escape from it or provide any sort of variance.

Their latest effort, VII, continues that trend. While it certainly sports some solid tracks, listening to it as a whole suggests that overall, it’s more of the  same – even if they’re now – ridiculously – attempting funk-folk and rap.

The opening track Feel The Chill sets the scene for VII being rather a troubled offering. The AM radio dial freakout effects and scratching, coupled with guitars and leadman Eric Earley’s twang, sounds like a mainstream radio country experiment gone awry. But what makes a song like Feel The Chill so boringly reminiscent of Blitzen Trapper’s older material, even if the band is attempting stylistic variance, is that Earley’s lackadaisical storytelling delivery remains so monotonous both within and among the songs. The same goes for Shine On, which somehow simultaneously features a hip hop beat, harmonica, and gospel vocals: Earley’s delivery sounds like it’s from a Kid Rock song.

Even the lo-fi backwoods rap of Oregon Geography comes across as more absurd than original. And what’s truly disappointing is that for a year that’s seen mainstream country artists like Ashley Monroe and Kacey Musgraves couple traditional sounds with unexpected topics like marijuana use, S&M, and marital strife, Blitzen Trapper, a lesser-known and experimental country band, do exactly the opposite. Attempts at new styles are simply a mask for topics and sounds and storytelling methods that have come before.

Elsewhere, Blitzen Trapper don’t attempt anything new genre-wise, as on Valley Of Death, Ever Loved Once, and album closer Don’t Be A Stranger. While all are fine tracks, in context of some of Blitzen Trapper’s past so-called alt-country songs, the three come off as comparatively less engaging. Even Earley’s uncharacteristic emoting can’t really make Don’t Be A Stranger stand out among Blitzen Trapper’s catalogue. In addition, Ever Loved Once is especially cliché, with its banjo plucking coupled with lyrics about an old brown dog sitting on a porch.

The album doesn’t fare much better lyrically. Take Thirsty Man; when Earley sings “Your love’s like rain in the desert to a thirsty man,” eyes are all but invited to roll at the twang-laden phrase that’s about as clever as any given pick-up line. A close second candidate for worst lyrics comes from the track with the worst title on the album, Neck Tatts, Cadillacs. It’s a tale about a woman with crooked teeth and a neck tattoo, and comes across as Early begging for status validation as an authentic spokesperson for the old, weird America.

In sum, whereas Blitzen Trapper used to be a band who didn’t play it safe and were therefore capable of both successful and failed experiments, at this point in their career, they’re generic at best and bad at worst. They’re now best suited to return to their roots and rely on what’s always helped them rise above the rest: their instrumental talent. While the band’s penchant for steadying, shimmering guitars and unexpected use of instruments certainly appears on VII, it’s not enough to overshadow this album’s lack of originality.