Bloc Party – A Weekend In The City 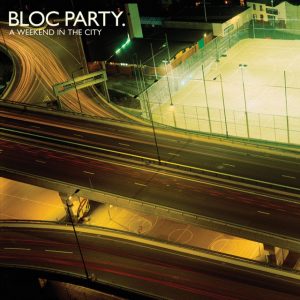 Homosexual relationships. Cocaine. War. Terror. Religious intolerance. Racial hatred. The monotonous ennui of a Monday morning commute to a job you hate in a world that seems like it’s let you down. As second albums go, it’s hardly “Ruby, Ruby, Ruby / Wooooah oohhhhh”.

So Bloc Party, and particularly chief lyrical architect Kele Okereke, have looked inward for their sophomore effort and found that, generally, it’s not much fun to be young, working and living in London. Despair, disillusionment, dissatisfaction, the vague fears that we could get blown into a billion pieces on the daily commute – A Weekend In The City bubbles with the discontent and disquiet these things bring.

“I am a martyr / I just need a cause,” Kele insists on Uniform, and lyrically at least, a thousand pennies drop. It’s a neat, and wholly modern way to spear the frustration felt by those who don’t know which direction to point their lives, and who aren’t exactly thrilled by the way they’re currently traveling. And, in a generationally apt way, it’s frustration which is one of the key themes of A Weekend In The City; it’s frustration which means that the word soup of ineloquent disgruntlement that causes some songs to get bogged down is almost appropriate.

Deliberate or not, the clumsy descriptions of escape through “crosswords and Sudoku”, or the awkwardly worded desire to have “climbed more trees” and “eaten more wild blackberries” mentioned on Waiting For The 7.18 aren’t particularly well formed, but they seem truthful, unaffected and, in the nature of their awkwardness, reflective of what it is they are describing. You know what he means, even if you don’t quite agree with what he says.

Musically, there’s nothing to argue about. Be it the swooping euphoric rush of Waiting For The 7.18, or the glitchy cut-and-paste that opens Hunting For Witches, or the beautifully elegant guitar chimes of Kreuzberg and I Still Remember (which suggests that alongside the band’s kept works by Bertrand Russell and Brett Easton Ellis, there might just lurk a copy of The Best Of U2), this is a much better developed, a much more confident band then the one last seen on Silent Alarm.

Make no mistake, some of the songs on A Weekend In The City are spectacular. Uniform, after three minutes of build, three minutes of tempering pain with restraint, breaks in intoxicating fashion: a multi-tracked choir of Kele’s lose it, lashing out with despair at those surrounding him, and the band seamlessly changing gear, guitars crunching with metallic intent. Hunting For Witches winds its chords suffocatingly tight and keeps the beats darting and scattered to teeth-clenchingly paranoid effect, and the oddly syncopated two-step of lead single The Prayer works far better here as part of a whole than it did on it’s own.

Ok, the second half doesn’t quite punch with the same weight as the first, but given the catharsis of the early songs there was always going to need to be a period of retrospection. It’s just a little unfortunate that some of the tracks suffer from the emotional easing down. The dreamy, flighty, ode to Columbian marching powder that is On particularly struggles; it’s just too slight and too lightweight to stand in such company.

How good is A Weekend In The City? At times, it’s brilliant: bold, forthright and honest. It’s a bleak appraisal of the world today. But then again, sometimes the lyrical problems are insurmountable, there’s a vague drift towards a recycling of ideas during the later numbers and it can, just occasionally, be a little pretentious. However, in the light of its triumphs these are minor issues. A Weekend In The City is not flawless, but given its subject matter, given the world into which it was born, it probably wouldn’t be right if it was.