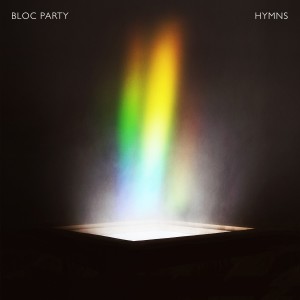 Forget everything you knew about Bloc Party: this is not the same band that created one of the best début records of the noughties in 2005’s Silent Alarm. While founding members Kele Okereke and Russell Lissack remain at the helm, bassist Gordon Moakes and drummer Matt Tong have departed, during the hiatus that followed the release of 2012’s Four.

It’s not just the composition of the band that has changed drastically in the four years since Bloc Party were last in the spotlight, though. This new incarnation of the band sound so far removed from the one that soundtracked so many student nights out with the exhilarating, youthful urgency of Helicopter and Banquet that it seems almost pointless for them to remain under the same name.

Although Bloc Party have never exactly rested on their laurels – their third album, 2008’s Intimacy, was in its electronic direction quite a radical departure from their first two releases  – new LP Hymns is something else. Other than Kele’s distinctive vocal, there is little here to connect this Bloc Party to any of their previous work, lead single and album opener The Love Within being a perfect example.

The song has divided fans ever since it debuted on Annie Mac’s BBC Radio 1 show, and other than a half decent chorus it is a complete mess. On first listen it sounds like they have gone synth mad, but the excruciating whining that dominates the song actually comes from Lissack’s guitar. Lyrically it is very much business as usual (“The love within is moving upwards/ sweeter than any drug”), but it really is awful and best avoided.

Things don’t get much better with Only He Can Heal Me. It is listenable – more than can be said for The Love Within – but  massively underwhelming, with only a fairly drab beat and the distant sounds of a backing choir repeating the song’s title to accompany Kele’s almost stuttering vocals, while So Real is unlikely to provoke any reaction beyond a shrug of indifference with its ambient melody.

After what can only be described as disappointing introduction to the 2016 version of Bloc Party, Hymns picks up somewhat with The Good News. It is certainly interesting at the very least, demonstrating a bluesy rock influence that sounds a millions years away from the chaotic energy of Hunting For Witches. The lyrics are once again influenced by religion as Kele sings: “You just need faith, been looking for answers in the wrong place.”

Despite injecting a bit of life into Hymns, The Good News sounds absolutely nothing like anything else on the record, so feels a bit out of place. The same cannot be said of Different Drugs, however, which is arguably the highlight of the record and the most fully realised of Bloc Party’s new sparser arrangements, its haunting melody packing a much-needed emotional punch.

Elsewhere, there are moments where Hymns gets close to finding some common ground with the Bloc Party of old, particularly in the intricate guitar work of Into The Earth and the relatively sprightly Virtue, but for the most part it is all about experimentation. The results are mixed, ranging from the rather bland shuffling of My True Name to the intense and slow-burning closer Living Lux, which goes someway towards making amends.

For those expecting the worst ahead of Bloc Party’s return, Hymns is likely to validate all their fears. Change may have been unavoidable after losing two influential members, but to change beyond recognition is almost an insult to the original band’s legacy. Whether this will be the final chapter in the Bloc Party story isn’t clear, but if it does prove to be the end, it will undoubtedly go down as an anticlimax.