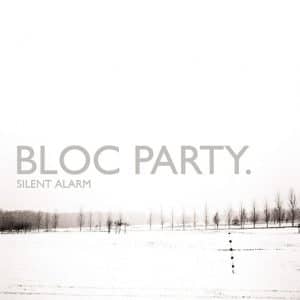 The rise of Bloc Party would make a good experiment in human behaviour. Give people an increasingly commercialised music scene where even TV adverts purloin songs from The Cure, where people actually care that Busted have split, where the charts are ruled by plastic-coated one-hit-wonders, and they’ll soon come running to champion something that isn’t borne out of marketing hype but smacks of integrity.

Cue the postmodern art rock band who sing of real life and who don’t need, nay refuse, to be glossed up into a ready-for-radio package. Self-conscious and edgy, Bloc Party have risen from the now infamous New Cross scene, a club atmos where everyone from musicians to engineers to marketeers pitch in and help each other out. In a two-fingers gesture towards the commerical big cheeses they have started a music for music’s sake movement, almost in a linear timeline to Goldie Lookin Chain‘s word-of-mouth success and The Others‘ guerilla gigging.

Of course, the human behaviour experiment isn’t that simple. The backlash bands have to be good. And it’s fair to say Bloc Party have risen from a detritus of mediocre groups who are all signpost but no direction. But having seen Bloc Party years back in a tiny 50-capacity venue in Reading it was clear from their frenetic energy, melodic vibrancy and lyrical ‘young London’ vernacular that they’d be going places.

Thankfully their debut has lost none of this upfront vigour and musical mastery. The drumming alone makes for exciting listening with its menagerie of trills, poundings and syncopated off-beats. Also four of their cracking singles are on here: Banquet, She’s Hearing Voices, Helicopter and their latest offering, So Here We Are.

Opening track Like Eating Glass, from its trembling guitar opening to the exclamatory high vocals of Kele Okereke singing “it’s so cold in this house” and then to the warm beat-laden chorus, it’s an anthem for the Z-generation who are returning to raw outspoken music. As the band are predictably reticent about musical influences, I’d take a stab at early Cure, Gang Of Four and The Fall.

Edgy sharp riffs, multi-layered dynamics and fast-paced young punk attitude abound on this album, and none more so than on the aforementioned Helicopter. Banquet also has that mildly-anarchic edge with Okereke’s emboldened voice piercing each lyric, telling of Blair’s Britain youth and philosophical one-liners. With similar art rock riffs to Franz Ferdinand in this instance, Bloc Party’s more alarmist rough-round-the-edges sound blasts away any FF slickness. These are boys who prefer baggy jeans to sharp suits.

That Bloc Party have a more reflective and sensitive side is evident in Blue Light and This Modern Love, displaying simple yet beatific sentiments while maintaining a streetwise awareness. The latter song gushing “I’ll pay for you” in the mini chorus while also proclaiming in the verse: “Baby, you’ve got to be more discerning/I’ve known never known what’s good for me.”

This band are exciting, steering away from simplistic ‘angsty’ songs about youth, instead giving us a rich tapestry of dialogues behind swarms of fast-paced energy, borne out of true musicianship. Not only is this a blindingly brilliant album, it marks a sea change in attitude that’s been a long time coming.