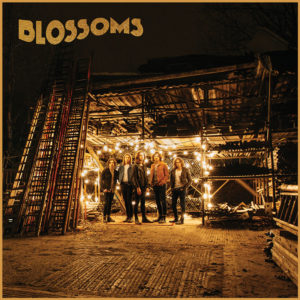 Stockport’s five-piece Blossoms were only formed three years ago but have already managed to top the album chart with their recently released, self-titled debut. The band seem to have carved out a niche by sounding like a long-lost guitar wielding synth-pop band from the 1980s, whilst at the same time sounding occasionally similar to later acts like The Bravery or, more recently, The Kooks, The 1975 and Catfish & The Bottlemen. With singer Tom Ogden’s vocal style sometimes mimicking that of Arctic Monkeys’ Alex Turner, the collective force was always likely to be a hit with young girls, more refined aficionados and also the most prominent radio stations and influential magazines that always bow to suitable newcomers with swathes of hype.

Initially making music in a scaffolding yard just for something to do, the band were taken under the wing of The Coral frontman James Skelly after he invited the band to play some tunes with him; Skelly’s involvement continued – despite The Coral being recently reformed – and he sits in the control room for the noticeably polished debut.

Blossoms have favoured less well in the singles chart where downloads and streams continue to cloud the true clarity of sales. Despite having released so many singles and EPs to date, they have strangely failed to chart in the UK whatsoever – barring the radio plugged Charlemagne, the catchy, jangly synthpop album opener that points unashamedly towards the ’80s. Of the 12 tracks on the album, no fewer than eight of them – including Charlemagne – have been given single or EP status and the only single missing from the album is You Pulled A Gun On Me, the song that first attracted Skelly to the quintet which is no surprise as it’s not a million miles away from the Liverpudlians themselves.

Blow is the earliest single to find its way on to the album and it’s one of the strongest tracks here, benefiting from a cool bass line intro and later, fuzzy guitaring. Cut Me And I’ll Bleed was the next single release and this is where the most obvious likeness to Turner appears, not particularly in tone but delivery, the track also bringing a chunk of swagger to the album alongside a decent melody, synth line and impressive guitar solo. Another single – At Most A Kiss – appears with an almost glam rock stomp that reminds of cheesy acts like Dr And The Medics but thankfully develops into something far more interesting. Ogden’s favourite Blown Rose tells of the stately homes of England but this also sounds a little on the cheesier side after starting off slightly reminiscent of an extra-jangly track by The Smiths, its chorus sounding more familiar than air as originality takes a back seat.

A few mediocre moments are dotted throughout the album such as the short epilogue-like piano-led Onto her Bed, rather tediously weak single Honey Sweet and the acoustic wind down of My Favourite Room which sounds completely out of place here. But counter balancing these are the two best tracks of the album by some considerable distance – Getaway and Texia. The former (yes, another single) is the catchiest of all and despite some dubious lyrics like “I’m over you, get under me”, it’s a cracking pop song that’s bound to resonate with young females and older pop admirers too, as its synth-backed three minutes leave a lasting impression. Better still is Texia; the synth backdrop is nothing new being the closest comparison to one hit wonders The Bravery, but the melody is to die for. It’s comfortably the best track of the lot and is ridiculously not even a single (yet, of course…).

They may have become the latest next big thing for the hype-mongers but there is little doubt that Blossoms could, erm, blossom into something big. Support shows for The Stone Roses will only propel them further along the route to stardom but they need to tread carefully; at times they can appear to be heading disastrously towards the precariously difficult ‘was rock but now boy’ band path that acts like Kodaline dally with, and that would be a waste.