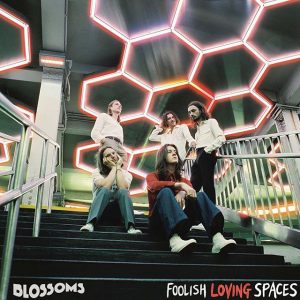 Ever since they emerged in 2015 with their well received and successful debut, Stockport’s Blossoms have slowly but surely established themselves as one of the UK’s premier indie bands. They haven’t done it through making grand statements or obnoxiously infiltrating the mainstream. Instead, their rise has been refreshingly down to subtly refreshing and expanding their sonic palette beyond that of a traditional indie band to encompass all manner of influences and sounds with a strong melodic sensibility at the heart of it. Equally beloved by The Stone Roses/Oasis loving indie heartland and the more experimental end of the genre, Blossoms find themselves in a perfect position to capitalise on their goodwill on their breezy and dynamic third album Foolish Loving Spaces.

This album highlights how Blossoms have redefined the parameters for indie bands making glorious pop bangers, and their template is very much informed by the sort of day-glo psychedelic kitchen sink approach used by bands like ELO in the ’70s. Indeed, the ’70s pop aesthetic is present throughout the album’s disco flourishes and heartfelt, wide-eyed romantic ballads. Think Paul McCartney’s open hearted super melodic pop of the Wings era and you’re pretty close to the Blossoms sound. On this record they make their love of ’70s pop more evident than ever, but also imbue it with a fresh modern approach.

The album begins with the synth blasts and glorious front loaded hook of If You Think This Is Real Life and it’s immediately clear that Blossoms aren’t pulling any punches. Brilliantly exuberant and with a heartfelt core this is perhaps the brightest and boldest opener from an indie band in an age. There are strong elements of funk and rhythm and an impetus to get you dancing that is utterly infectious, as best heard on Your Girlfriend. There are guitars as well – it’s not as though they’ve been abandoned – but crucially they act as accessories and complements to the groove. There’s a lightness of touch at work here; you get the feeling that singer Tom Ogden is genuinely full of joy and wonder as he delivers the endearing hook. There’s nary a sliver of darkness; it’s positive vibes all the way.

While not particularly distinctive on its own, Ogden’s voice and his ability to carry the hook stands out. Each song has an insidious way of wrapping itself around your brain and refusing to let go. The two defining love songs in the middle of the record, Oh No (I Think I’m In Love) and Romance, Eh, could be considered too far up the cheesy scale, but it would take the coldest heart not to warm to songs as brilliantly constructed and charming as these. We all could do with a little bit of joy in our lives, and Blossoms’ focus on the pure and simple pleasures of love makes for the sort of dreamy escapism that makes Foolish Loving Spaces such an easy and satisfying listen.

The album’s final song, Gravity, is perhaps the most ambitious and highlights what Blossoms are capable of when they cut loose. Sharp and insistent it drives along on a propulsive groove that brings Foolish Loving Spaces to a stirring close. Again working with trusted collaborator James Skelly of The Coral, the band have emphasised their good points, pointedly aligning themselves in an entirely natural pop direction that doesn’t feel forced. Euphoric, danceable and smile inducing, this strong work is one of the purest and sweetest albums in a while, and from a band at the top of their game.