Blue-Eyed Hawk – Under The Moon 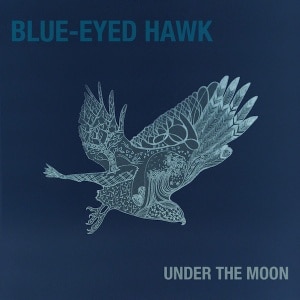 The commercial music industry tends to have a somewhat misguided obsession with debut albums, sometimes to the exclusion of artistic development and progress. This tendency may now have transferred to the jazz world, an area of music generally more averse to hype and promotion. It feels like a risk, therefore, to suggest that Blue-Eyed Hawk’s first album is one that genuinely feels like a fully formed work. It sounds carefully mapped out, cohering whilst drawing influences from a wide range of artistic sources (musical and literary).

This band combines some of the most exciting young musicians in the contemporary improvised music scene. Vocalist Lauren Kinsella and drummer Corrie Dick are musicians with highly individual approaches to their respective crafts. Alex Roth is an innovative and in-demand guitarist, part of an extraordinary musical family and as comfortable in a big band setting as forging new musical paths. Trumpeter Laura Jurd has been hailed as prodigious, although the music on her excellent album Landing Ground is very different from what can be heard here. All four are members of the enterprising Chaos Collective and can also be heard on the excellent Chaos Orchestra album released earlier this year.

Some will no doubt reignite the ‘is this jazz?’ debate on first hearing Under The Moon. Improvisation is in abundance, but it is absorbed more intricately within the lattice of the songs and it is balanced with the equally important role of production techniques and studio interventions. The band have worked hard, with significant contributions from Leafcutter John (Polar Bear) and Tom Herbert (Polar Bear, The Invisible) on the sound and atmosphere of this music. The sonic range is fascinating and exciting. Isolated moments bring to mind the studio enhanced grooves of Tortoise, the panoramic sweep of Aaron Copland, the directness of country songs (Patsy Cline perhaps), the precise rhythmic structures of Battles or Three Trapped Tigers or the expressiveness of Joni Mitchell. Jurd’s trumpet is sometimes treated to sound otherworldly, and the band explore rock dynamics (distorted guitars and insistent, driving drums) to powerful effect. The process has clearly been very much collaborative, with all band members contributing original compositions and all very much defining the group sound. This is not music for jazz clubs necessarily, but it opens out the music to a potentially wider audience without a hint of artistic compromise. This feels like the music that these musicians want to, perhaps even have to make.

The opening Oyster Trails provides a neat summation of the band’s approach – a foreboding introduction eventually gives birth to aquatic sounding, effects-enhanced drums, shifting guitar textures and a gently twisting, unpredictable vocal melody. There is an enveloping warmth to the sound. Lauren Kinsella’s Somewhere is in fact Over The Rainbow as you have never heard it before – a near delirious bid for escape amidst a mischievous, gnarly and infectious guitar riff and thunderous rock dynamics. It is both irreverent and inventive in its own right and a brilliant showcase for Kinsella’s unusual, captivating vocal improvising.

One might be forgiven for assuming that Laura Jurd (whose own music so far has been more serene or impressionistic) might be out of her comfort zone amidst this kind of intensity, but she contributes the spikiest, punkiest song of them all in the hyperactive Living In The Fast Lane. Its clipped phrases and punctuating distorted riff are reminiscent of the songs on Acoustic Ladyland’s Skinny Grin album, but it has an energy, enthusiasm and purpose of its own too.

Many of the songs have the reach and directness of pop songs whilst abandoning straightforward forms in favour of a more thoughtful and linear approach. There are three songs that stand out for being disarmingly beautiful and deceptively simple. Alex Roth’s setting of Seamus Heaney’s Valediction is contemplative and affecting, with some deftly handled harmonic shifts that feel very natural. Corrie Dick contributes two songs that are romantic and full of feeling in the best way. Try To Turn Back evokes wide open spaces and dusty highways, whilst For Tom And Everything (inspired by his grandfather) is both mournful and quietly graceful. Songs such as this and Roth’s similarly elegiac, shimmering Aurora 5am have a palpable sense of memory and are delivered with mature subtlety. If contemporary jazz can sometimes feel a little scientific or impenetrable, this is a powerful counterbalance to that tendency.

Whether improvising longingly around the text for WB Yeats’ O Do Not Love So Long or developing themes around original lyrics, there is a consistent sense of real respect for songcraft. Melodies seem to be drawn from the sense of the words, and much of the improvisation is strongly connected with melodies and themes. The lack of a bass player (although synth bass lines sometimes seep in where needed) makes the band relatively unusual in both conventional rock and jazz set ups, and it seems to afford the music a strong sense of space, leaving room for textural experimentation as well as melodic development. There is great fun to be had in listening out for the small details and nuances that really make this music resonate. In sum, Under The Moon is one of the most thoughtful and imaginative albums of the year.