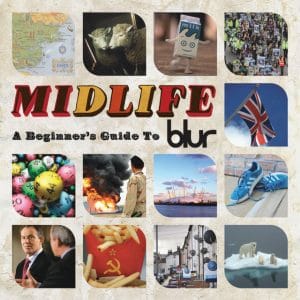 The last time Blur had an album out was 2003’s Think Tank, and The Best Of Blur was unleashed back in 2000. So when a compilation of carefully selected tunes are put onto a CD, some might cry: “But they’ve already had a greatest hits album!” Yet with their reformation and upcoming tour, Midlife: A Beginner’s Guide To Blur is a timely reminder of one of the most impressive canons of work by a British band in the last 20 years.

Designed for casual listeners familiar only with their singles, Midlife highlights what their many loyal fans well know; that they also have songs that are far removed from radio-friendly formulae. And amazingly, this is the first time the under-appreciated classic 1992 single Popscene has featured on an album.

Wisely this guide is a two-parter, offering listeners a true sense of the band’s musical accomplishments, favouring outré numbers amidst a smattering of their famed Britpop-era classics – Girls & Boys, Song 2 and the Graham Coxon-vocaled Coffee & TV are of course included.

But it begins with Beetlebum, with its shambling rhythm based on Coxon’s characteristic guitar hook under incomprehensible lyrics. At a length of five minutes it wasn’t designed for radio, but in 1997 it topped the singles chart in the UK anyway, their second Number 1 after the infamous Blur vs Oasis duel that saw Country House scale the heights two years earlier. The song’s success aside, it demonstrated Coxon’s growing influence and, paired with Damon Albarn‘s distinctive vocals, marked a turning point for a band long seen as Britpop poster boys.

On through the first CD and the diversity of their material takes in the musically challenging as well as the tuneful. Bugman, from 13, mixes grimey, screechy guitars into a mish mash of sounds that makes for an abrasive listen, but somehow it works brilliantly. Conversely, He Thought Of Cars, from the deliberately commercial The Great Escape, is a terribly bleak song about suicide. Whirring guitars and Albarn’s delicate vocals find the band in reflective form.

The penultimate track Sing is a unique Blur tune; from their debut album Leisure, they’ve not produced anything else quite like it since. Domineering guitars, thudding piano and percussion and soft harmonies add up to a serene listen that gives way to the Shipping Forecast aided This Is A Low, one of Parklife’s highlights behind the smash hit singles.

Disc 2 underlines the compilers’ understanding that album track orders matter, even in these days of MP3s and iPod shuffles. So Tender picks up the pace left by This Is A Low, continuing in reflective mood, but by Chemical World the tempo has shifted up a gear. Still there’s space for the trippy Trimm Trabb, from 13, a song about Adidas three stripe trainers. It seagues into Badhead and its dreamy piano solo, space noises and heavy guitars.

With Coxon’s return to the fold there’s relatively little space devoted to the Coxon-less album Think Tank; only Good Song, the touching single Out Of Time and the closing downbeat Battery In Your Leg make the cut. But with the original foursome reunited it’s as well that Midlife dwells mainly on the music they made together. As a playlist of what Blur were and capable of, it suggests a band with few peers.