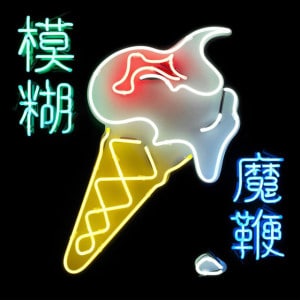 With the bulk of the material recorded in Hong Kong over seven days during a lull in touring, for a while it looked like The Magic Whip might never see the light of day. In a masterstroke of acting casual, the sudden announcement that Blur‘s new album was finished took many by surprise, deftly circumnavigating the hullabaloo that will likely surround the next Gorillaz album, lately slated for 2016.

So for all the chinoiserie that frames the release, does The Magic Whip actually sound like a record made in or about the Far East? Damon Albarn seems to think it does, but then it was only he who returned to Hong Kong when some time had elapsed after the band sessions to finish his lyrics, inspired by the location. And while producer Stephen Street had the job of making sense of the sessions, the record does at times still leave you wondering if this is not in essence another Albarn solo project, with Blur as his tight backing band.

In places it does feel like we are straying into Gorillaz territory; hardly surprising given that band’s ability to bridge East-West cultures. Yet this is in no way a bad thing. As Ghost Ship starts up with its cheery under-the-Westway skank, we half expect Albarn’s early Gorillaz period melodica to start toot-tooting along (it doesn’t). Then there is a light dusting of synthesizers and the sonic ephemera of the 1980s across most of the rest of the album that most closely recalls Plastic Beach, saturating the album with an urban neon glow that provides a glossy Asian proxy.

At least Albarn’s musical adventures since 13 are generously acknowledged here, a tricky feat of musical diplomacy which producer Stephen Street handles with tact and taste. And while not absent from the record, another of his more prominent recent musical personae – sad-sack Damon, the balladeer of pastoral nostalgia and the melancholy of modern life pushed to the point of near-parody on Everyday Robots – is thankfully curbed in favour of a generally more exuberant approach.

However, for most who have patiently waited 16 years for this record, it’s the interplay between Albarn and Graham Coxon that was always going to be the main attraction. This is most obvious on the single Lonesome Street, shunted to the front of the track-listing as if to reassure the nervous with an instant bonhomie that instantly recalls Blur’s glory days. It’s certainly set in the land of the familiar, riding the 5:14 to East Grinstead and cheerily joining the dots between For Tomorrow’s bus ride and Coffee And TV’s escape to the country. Then, Go Out is a brilliant throwback to the period when Coxon was given greater creative control, with great slabs of echoey guitar fuzz helping sculpt their sexiest number since Beetlebum.

Overall, lyrics are haphazard, not overthought and rarely penetrate much deeper than cultural tourism. Only the sober meditation on overcrowding, There Are Too Many Of Us, attempts any serious commentary, with its determinedly straight face veering close to camp. Neither does the music attempt any of the star-shaped experiments in pentatonic composition that shaped Monkey: Journey To The West. In fact, the effect of the pentatonic synthesizer patterns in Thought I Was A Spaceman comes worryingly close to the Eastern musical stereotyping of the Siamese Cat Song. And while The Magic Whip is without a doubt inspired by the urban, it does this by messily conflating the global and the lo-o-o-o-o-cal. Of course, all this happens with Albarn’s customary lyrical charm, yet the overall reluctance to make a statement is both a strength and weakness of the album.

Maybe this is a conciliatory gesture to the big group effort that The Magic Whip has to present to the world. However, skimming along the surface of the South China seas, rather than diving deep, seems entirely appropriate for an album designed to exude spontaneity, and a quick no-pressure production process. That the band neither rushed into recording significant new material, nor spent too much time on recording once they reached that place, was wise. The Magic Whip succeeds splendidly in coming across as a comeback album that hasn’t been overthought, flashing a nonchalant dare to any prospective Oasis reunion project.