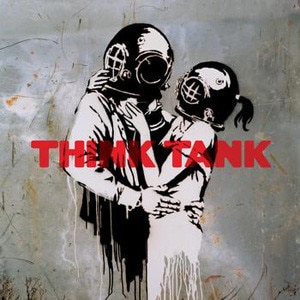 The idea of Blur without Graham Coxon is certainly a strange one. It was the erstwhile guitarist whose sound dominated the band’s best work, and who kept pushing their experimental sound, often at the expense of record sales. With Coxon gone, and Fatboy Slim installed as one of the producers, it seems fair to suggest that Think Tank will be a radical new direction.

Of course, the band’s seventh album is a very different prospect to previous albums, but it’s none the worse for that. Blur have always experimented and developed their sound, and Think Tank is no expection. There’s no sign of the rumoured dance music – Norman Cook produces just two tracks and they’re both as guitar led as they come.

Think Tank is an album of wildly differing sounds – from the wistful string laden Out Of Time, though the hardcore punk of We’ve Got A File On You, to the woozy freeform jazz of Jets, each track is different. While this may be a problem for some bands, Blur pull it off.

If 13 was Damon Albarn‘s ‘break up’ opus, then Think Tank appears to be his ‘happily settled down’ album. Fatherhood has obviously had a healthy effect on him as the opening Ambulance proclaims “I ain’t got nothing to be scared of/’cos I love you”. There’s a darker edge to some of the other tracks here (The Happy Mondays soundalike Brothers And Sisters deals with drug use), but the overall impression is that of contentment.

The miminalism of titles such as Good Song and Sweet Song do exactly what they say on the tin – the former is good, an acoustic affair apparently recorded in Africa, while the latter is indeed sweet. In fact Sweet Song’s heart tugging piano makes it the best track on here, while the minute long punky thrash of We’ve Got A File On You provides a good shot of adrenaline halfway through the record.

The only song that sits somewhat jarringly on the album is Crazy Beat. It’s basically a Fatboy Slim remix of Song 2, and while it will probably be a massive hit (it’s scheduled to be the band’s next single) it doesn’t sound quite right sat between the gorgeousness of Out Of Time and Good Song.

The final track, Battery In Your Leg, is the only appearance that Coxon makes, and with layer upon layer of some typically brilliant guitar work over valedicatory lyrics (“this is a ballad for the good times/and all the dignity we had”), it makes for a touching finale.

With distractions such as Gorillaz and his forays into world music, it would have been understandable had Albarn and company bade farewell to Blur. We should be grateful they didn’t – Think Tank stands proud in an already impressive canon of work.