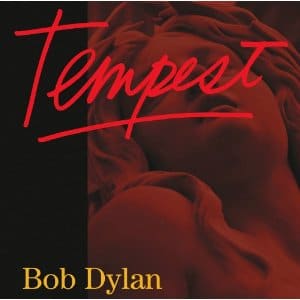 Desiccated coconut is coconut which has had the moisture removed from it. Bob Dylan‘s voice must know how that feels. Tempest is surely the end of the epic journey to discover what dry sounds like. You’re scared of holding any naked flames in its presence lest your stereo go up like a California forest.

But we knew that. We knew that the elastic that once supported his nasal twang snapped years ago. We know he’s Mr Contrary. We know because his last album was a series of Christmas songs played totally straight. We know because he tours incessantly but then treats some shows like he’s been blackmailed into appearing. We know because when he plays live he approaches his old songs by growling a couple of words and then spittingtherestoftheverseoutwithouttakingabreath, often to a completely different tune. In many ways you could say he’s doing exactly what he’s been doing for most of his career. Looking for snooks to smirkingly cock, while a crowd of commentators chase after attempting to decipher exactly what it all means.

There are some fine songs on here. We see angry Dylan on Pay In Blood, where he sings somewhere between Tom Waits and the sound you get if you fill a cement mixer with brass doorknobs. It’s vicious and enthralling, Dylan spitting intricate vitriol with passion belying his years. Sentimental Dylan gives us the Lennon-dedicated Roll On John, which in lesser hands could have been as mawkish as a petrol station mothers day card featuring a kitten, but instead carries itself off with noble grace, while solemn-dark Dylan presents the windswept strings of Scarlett Town complete with portentous imagery. And what to make of the honky-tonking Narrow Way and the opportunity it gives for lothario Dylan to appear – last seen selling lingerie – and talk of “heavy stacked women / with a smile on her face” and “taking his head and burying it between her breasts”. Is he joking? Maybe. Possibly.

Musically things are kept pretty minimal on Tempest. Most tracks consist of simple melodies, often endlessly circling around the duration of the track. Which is sometimes fine; when Dylan’s storytelling is as good as it frequently is here you don’t need much more. But when the allegories and the metaphors are less intriguingly dense, the songs are left rather bare. The worst example is the title track, a nigh on 14 minute iceberg-by-iceberg recounting of the sinking of the Titanic. Depending on your view towards maritime tragedies you’ll either find it fascinating, or it will be as painful as being trapped in a lift with someone who finds maritime tragedies fascinating.

Tempest is a flawed but mostly fascinating album. It bears the restlessness of an artist seemingly as interested in making music as he’s been for a while. Which would seem to be a very Dylanesque note on which to leave the stage. We shall see.