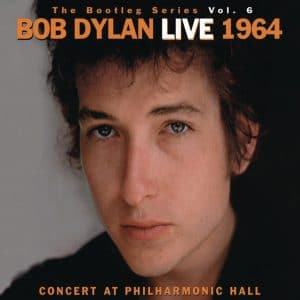 Not content with expanding the possibilities of pop music beyond the confines of the three-minute single, and grafting the literary pretensions of folk music onto the primal thrust of rhythm and blues, Bob Dylan must also take much of the credit (or should that be blame) for the music industry’s archive-robbing deification of pop history.

It was, after all, the release of the first three volumes of the Bootleg Series, back in 1991, that alerted record companies and fading rock stars to the possibilities of just how lucrative this recycling of pop history could be.

As any self-respecting Dylan freak will know, this set contained all manner of treasures that had never seen the light of day, outside of bootlegs (hence the title) and opened the floodgates for every third division faded idol to put out all those half-finished songs and ramshackle demos that had been gathering dust in the attic.

Now we’ve reached Volume 6, a near pristine recording from a 1964 concert, that is no less essential than its predecessors. Recorded for official release, but left in Columbia’s vaults until now, this double CD set features just Dylan and his guitar and a handful of songs from the then current Another Side Of Bob Dylan, alongside tracks from his previous three albums.

It captures Dylan at a turning point in his career, trying to shake off the protest singer tag that had dogged him for the previous 18 months. Perhaps that’s why the numbers where he is joined by his then paramour, Joan Baez, sound strangely out of place – even more so when heard alongside Mr Tambourine Man, Gates of Eden and It’s Alright Ma (I’m Only Bleeding). All of the latter were unrecorded at the time but prefigure the visionary surrealism of Dylan’s creatively rich mid-’60s period.

The performances are, needless to say, close to perfection. Dylan, perhaps invigorated by his new artistic direction seems in good spirits and jokes freely with the crowd (although his crowd-pleasing antics don’t extend to performing Blowin’ In The Wind). He also launches into several songs that would not see an official release for nearly three decades – Talkin’ John Birch Paranoid Blues, If You Gotta Go, Go Now and Who Killed Davey Moore?

The historical, not to say musical, importance of this double CD cannot be exaggerated, offering not just a collection of songs performed with mesmerising simplicity and emotion, but also a snapshot of a performer in transition. Who would have thought the best was yet to come?