Bob Dylan – Together Through Life 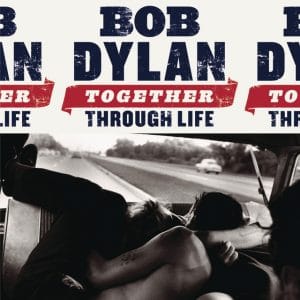 He’s just a regular Joe, is Bob Dylan. So he would have us believe, when it suits him. Since his first withdrawal from the spotlight in the late ’60s, his output has always veered between brilliance and mundanity. And when one of those mundane albums pops its head up, it’s never clear whether his espousal of the ordinary is a deliberate choice, or evidence that, once again, Maybe Dylan Has Lost It.

Together Through Life is one of those mundane albums. It marries unremarkable 12-bar blues with lyrics that appear to have been composed on the back of a fag packet, and seems deliberately positioned to break no new ground whatever. And yet it’s wholly competent in its familiarity; slick, even. There’s none of the embarrassment that surrounds his ’80s output: Dylan is clearly in control here, and whilst it’s not exactly riveting stuff, its creator sounds like anything but a spent force.

The key to what he’s up to lies in his voice: not his actual, physical voice – which sounds, more than ever, like a lizard gargling with Swarfega – but in the emotional voice he adopts. It’s the same voice that narrates his recent autobiography Chronicles: an egalitarian, unpretentious, resolutely American voice; the voice of a careworn, hard-working regular guy whose manual trade just happens to be making music, and whose life on the road is closer to a hobo’s existence than a rock star’s.

The first half of the album is clunky, low-tempo blues, embellished by the occasional overwrought guitar solo, over which Dylan lays out the generic trials and tribulations of loving yer woman. It’s the kind of thing that a hundred grizzly bluesmen with a hundred typewriters would eventually bash out, given enough time and bourbon. Sometimes things are good – “I love you pretty baby, the only love I’ve ever known.” Sometimes they’re bad – “Since we got out of touch / I haven’t felt that much.” Women, eh?

Unfortunately this comes across as an aesthetic exercise: self-consciously recycling the Great American Songbook via the persona of an ageing Everyman. Yet perversely, the harder Dylan tries to present himself as the Everyman, the less real he appears. In his most recent albums, there was a sense of an authentic personality: within the morbid melancholy of Time Out Of Mind or the surreal humour of Love And Theft. Even Modern Times, for all its horny-handedness, was shot through with flashes of wit and eccentricity. Here, the recycling of blues clichés – both musical and lyrical – creates the impression that Dylan has coldly constructed this album rather than feeling any of it. It’s like listening to Jack Johnson singing about the good times and Ryan Adams singing about the bad times.

The second half of the album is no more impressive lyrically (“I must be losing my mind, you’re the object of my desire”, etc.) though it does loosen up a little in tone. It’s more upbeat, and some amiable Basement Tapes tramps-around-the-fire shabbiness lends a more naturalistic feel than the strictured blues of the first half. Dylan even throws in the odd musical flourish; with fiddles here and there, and the use of an accordion to play his traditional harmonica parts. It’s never enough to merit your undivided attention, but there’s at least a modicum of warmth and playfulness.

Ironically, only the throwaway final track (It’s All Good) provides conclusive proof that Dylan can still deliver the goods when he wants to. Taking an affectionate swipe at the most overused phrase of 2009, he uses his throaty chuckle to revisit the wry apocalyptic visions of his heyday; all set to a rousing, ramshackle backing: “Big politicians / Telling lies / Restaurant kitchen / All full of flies / Don’t make a bit of difference / Don’t see why it should / But it’s alright / Cos its all good.”

This twinkle in the eye at the close of the album is evidence enough that Dylan hasn’t lost it. Of course he hasn’t. It’s just that this time round, in his quest to assert his Everyman credentials, the contrary old bugger has chosen to keep it hidden away from us.