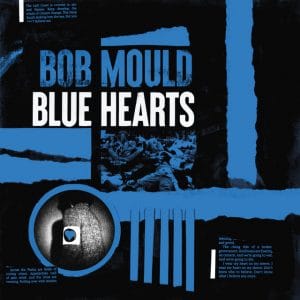 Bob Mould is a totally unique proposition in the world of recorded music, but the fact that he’s released his latest solo album, Blue Hearts, on the same day that Thurston Moore has released his is a coincidence too delicious to ignore.

Mould and Moore have both been figureheads of alternative rock music for nearly 40 years, and have both influenced thousands of musicians across the globe since they first made an impact on the underground consciousness in the mid-’80s as the leaders of Hüsker Dü and Sonic Youth respectively. Though their artistic careers have run parallel to each other, with their paths crossing a few times along the way, Mould’s ’90s output with his power pop band Sugar often beat Moore’s in the commercial stakes (in the UK at least).

With that in mind, it’s also a fantastic coincidence that Blue Hearts and By the Fire are the strongest releases either man has put out in quite some time. While Mould’s last truly great album, Silver Age, was released seven years ago, the three he’s put out since have been superb (and refreshingly aggressive) albums that show he’s still got a point to prove. Blue Hearts finds him upping the ante yet again.

The opener, Heart On My Sleeve, gets the ball rolling in a relatively sedate fashion – all acoustic chug and considered tempo – before Next Generation rips through the speakers at a blistering pace. From there, in customary Mould fashion, the album rarely lets up. American Crisis, which follows, was kept back from last year’s shimmering Sunshine Rock, and it’s a gritty, bloody slice of noisy punk. Then there’s Fireball, which is even nastier, with Mould spitting venom and his guitar spitting flames.

Despite approaching his 60th birthday, Mould still tackles love and sex with fiery fervour. Everything to You and Password To My Soul both deal with the more tender side of romantic life, while the glammy college rocker Leather Dreams deals with the stickier stuff. There are a handful of other tracks here, and they’re all almost uniformly great. Siberian Butterfly and Racing to the End are both superb demonstrations of Mould’s impeccable ear for a hook played at ear-splitting volume. After all, he and Grant Hart practically wrote the rulebook for this kind of tune.

After all we’ve seen, and all we’ve learned, in this mindbending year, who’d have thought two of the best – and most relevant – albums released so far would have come from two frazzled old white dudes like Bob Mould and Thurston Moore? That’s a surprise we didn’t expect but a great result nonetheless. And while we’re at it, has anyone got any news on that Michael Stipe album?