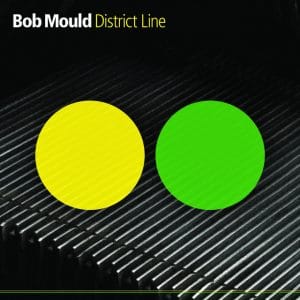 Frankly it’s hard to imagine Bob Mould caring. His place in the pantheon of genuinely influential, legacy-leaving, seminal bands is safe with Hüsker Dü (ask Kurt Cobain, if you could). He had his Warholian quarter of an hour in the early ’90s with indie-rock monsters Sugar and these days, when he’s not writing scripts, you might find him writing a weekly column in his local Washington DC newspaper or DJ-ing monthly at a 1000-strong gay club night.

Nice of him to find the time to record another solo album really. District Line is his first for three years and it ain’t half bad (which is more than can be said for the London Underground route of the same name).

Although billed as a “loud Bob” record – in contrast to some of his other opuses like the folky Workbook or dancey Modulate – this is, in fact, a misnomer. Or it is if “loud Bob” conjures up images of your eardrums bleeding to Crystal or Judas Cradle. No, these days, “loud Bob” means somewhere between Sugar, Buffalo Tom and latter day Soul Asylum, aka American alt-rock in earnest. No crime in that, particularly when “loud Bob” hasn’t lost his knack for a killer melody.

Opener Stupid Now is a case in point. Building from a strained vocal over guitar, heavy bass, drums and cello it suddenly erupts into a forceful and, okay, “loud” chorus whose uplifting hook counterpoints the “everything I say to you feels stupid now” lyrical refrain.

Elsewhere, Mould manages to visit vantage points from his previous six solo albums. Again And Again, Old Highs New Lows and Miniature Parade are semi-acoustic, dreamy and ever so slightly lackadaisical; The Silence Between Us and Very Temporary are strident but polite indie-rock; while Shelter Me is unashamedly, maybe controversially, concocted for the dancefloor.

Perhaps it’s fair to say that sometimes it all sounds a little too comfortable for, erm, comfort (the line “growing old, it’s hard to be an angry young man” is pretty telling). However, when someone can deliver their 18th-ish album in 25 years, still remain unpredictable, yet maintain consistent quality, you might say that the very least they deserve is “critical acclaim”. In the purest sense of the term.