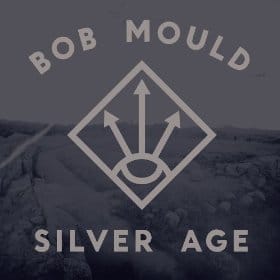 It’s been quite some time since Bob Mould released an album that recalled the heady days of Hüsker Dü or his power pop trio Sugar. He has released a staggering quantity of solo albums – 10 – including a couple that reflected his dalliances in the club scene. Yet none of them ever really hit the infectious punk highs of his early years.

Silver Age finds Mould entering his later years, if 51 can be considered as later years, but clearly he’s not just going to take such things laying down. “Never too old to contain my rage,” he states at one point on the title track, which is something to be thankful for. Mould has always been at his best when marrying righteous punk anger to big pop hooks, and Silver Age combines both beautifully.

Earlier this year the Sugar back catalogue was given a dusting down and re-released, so now seems as good a time as any for Mould to revisits his past glories, evaluate, and come roaring back with an album that could quite easily have fitted into that particular band’s work. There are many points of reference littered across the album that act as transport back to a time when Nirvana were the band of the moment, but one look at the lyrics of Keep Believing, in particular, sums up the period that Mould seems intent on revisiting. “An anthem keeps repeating, I’m dialling up a song from far away” hints at his looking to the past whilst references to a “picnic on a Pedro lawn”, “a circle drawn in blue” and “heaven took that monkey song” conjure up memories of The Minutemen, Germs and Pixies effortlessly. Musically it’s a straight forward punk tune that seems to have been written with Hüsker Dü in mind, and which possesses the typical Mould hooks giving it a keen pop edge.

Star Machine’s cynical take on bands that, to paraphrase an SST slogan, “suck corporate cock”, is shot through with the general dissatisfaction that was prevalent in the early ’90s when major labels were stacking up any bands that sounded vaguely “alternative” in a bid to hit on the Next Nirvana. The title track meanwhile retains a chugging vigour that proves that Mould is still more than capable of treading the line between the abrasive and the catchy. Anger hasn’t sounded this good for a long time. The Descent meanwhile heads back into power pop territory and could easily have been an outtake from the Copper Blue sessions. There are elements of Fortune Teller and If I Can’t Change Your Mind from that record here, which should please those who hanker after more Sugar material, but those who place too much stock in his music are warned that he “didn’t want to play the song that gave people so much hope”.

Moving away from punk directness and instant pop pleasures is the grandiose Steam Of Hercules, which is both flabby/excessive and beautiful/expansive. Mould’s tale of struggle, set against his wonderfully full guitar tone, tips the balance towards the beautiful. Elsewhere Mould hits the mark continuously to the point where there are very few disappointments to be found. Angels Rearrange is brooding, tuneful and sugar-coated, whilst Fugue State rumbles and smoulders with barely contained violence before exploding gloriously.

Silver Age does not push boundaries back, being as it is clearly an album that finds Mould keen to explore his past as an alt-legend. But on this evidence, his legendary status remains very much intact, as does his ability to write incredibly effective power pop.