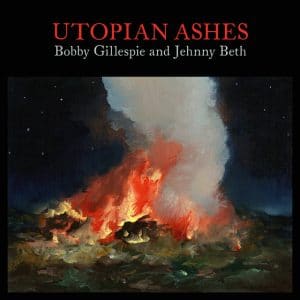 Homes. Luxury British saloon cars from the 1970s. A waltz. There are a few things for which being described as stately is expected. The music of Savages or Primal Scream probably do not number amongst the most obvious examples. Yet here we are, with Utopian Ashes, a collaboration between the lead singer of the former and the lead singer of the later that could very much be labelled as stately. If past performance is the best guide to future behaviour, at first the most surprising aspect of the album is the lack of urgency.

Only at first though. As you listen more, get deeper into the record, you find that a crippling sense of ennui kind of fits. Utopian Ashes isn’t an album concerned with action. It’s an album about inaction, about surveying the wreckage of a relationship and wondering when it all went wrong, and how, and why neither participant was willing or able to arrest its course.

Whereas you’d generally associate Gillespie and Beth with provocation, here we get pensiveness. Gillespie’s flatly definitive “And I don’t even love you / any more” cutting the sweeping strings of Chase It Down down to size. The damning “Sometimes I think love is a disease like addiction” on You Don’t Know What Love Is, or Living A Lie’s “Living alone / together / apart” all speak to the bigger theme, namely: love. What a bastard.

Musically, everything on Utopian Ashes is thoughtful and restrained. All the players – Primal Scream’s Andrew Innes on guitar, Martin Duffy on piano, Darrin Mooney on drums and Beth’s musical partner Johnny Hostile on bass – keep extraneous frippery to a minimum, focussing instead on melancholic textures, albeit with some neat adornments. Like the glittering harp that sprinkles gaiety over Living A Lie, or the way the smokey-jazz cafe piano lines of English Town flitter around the spindly, deliberate plod of bass.

Everything smacks of this being a grown-up album. Where grown-up in this instance is actually about being entirely honest and forthright about how bad things are. And it’s immensely, moreishly listenable. Gillespie and Beth work well as narrators and protagonists. She spritely and unbowed; he simultaneously vengeful and regretful.

This all provides numerous moments that are genuinely memorable. Remember We Were Lovers: a concussed Whiter Shade Of Pale, with both vocalists floating through reminiscence in eerily disembodied fashion. Or the grandiose You Don’t Know What Love Is. Or Sunk In Reverie’s deceptively jaunty jangle. Not about the war, but its aftermath; not break-up album, more broken-up album. Here lies a stately triumph.