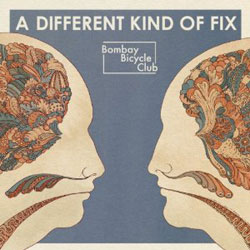 In a world where today’s NME cover stars peer out from tomorrow’s fish and chip paper there seems, on the indie treadmill, to be a lot of pressure to keep releasing new material. You might call this a return for Bombay Bicycle Club, but since this is their third album in as many years it feels like they’ve never been away. Their impressive work rate suggests that although each album has heralded a distinct new chapter, the treadmill could well be the one calling the shots.

After a promising indie début, last year’s Flaws saw a more stripped back and acoustic sound for the band. It gained them an Ivor Novello nomination, but it arguably came too soon after their first release – given more time to gestate it could have been a much more impressive album. A Different Kind Of Fix sees the North London quartet plugging their instruments back in, but the band have moved on rather than revert to the the no-nonsense sound of their first album.

BBC recorded this album in Hamburg, London and Atlanta and there’s a definite feel that they have been willing to explore more varied recording techniques. This is a more textured affair, with loops and layers added to the mix thanks to the influence of Animal Collective collaborator Ben Allen. The new sound feels like a logical progression in comparison to what has gone before and also a response to their peers – Foals‘ Total Life Forever seems to have been adopted as a sonic benchmark for this album. It doesn’t reach that height, but gets full marks for the attempt.

This is very much an album of two halves. The first half takes a while to gather pace and despite some highlights such as the epic Your Eyes it suffers from BBC’s tendency to make everything sound interesting but not especially memorable. As soon as we hit the spiky and enjoyable lead single Shuffle, the album gathers pace and the second half sees some more attention grabbing work such as Beggars (last year’s Flaws by way of Arcade Fire) and Favourite Day. The album concludes with Still, a huge change of tone to what has gone before and a possible hint as to their next port of call as it presents us with an alternative reality where Thom Yorke has ended up as the lead singer of Coldplay.

BBC ooze potential, are well liked and are never less than highly listenable, but with rather too many influences on show this album feels like a band still trying to search for their own distinctive voice. This may well be their best release so far, but album number four needs to take a much longer time coming. In order to achieve the greatness within their grasp the bicycle club need to do some free-wheeling instead of all this furious peddling.