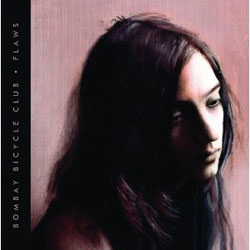 It hardly seems five minutes ago that Bombay Bicycle Club left thousands of wannabe bands trailing in their wake after winning a televised battle of the bands competition, resulting in a breakout performance at the V Festival.

That appearance gave lead to a four year rollercoaster in which the Crouch End collective notched up a series of European performances and UK festivals amid the release of two EPs and the debut album I Had The Blues But I Shook Them Loose.

A year on from their debut comes their second offering, Flaws. Part produced by lead guitarist Jamie MacColl’s dad (Neill MacColl), the album sees the band bid a brave farewell to the pounding bass and thrashing drum fills in favour of a more acoustic sound.

Rinse Me Down is a catchy and likeable opener that eases into their new style, followed by back-to-back warblers Many Ways and a revised and over-simplified version of Dust On The Ground. Then the tempo lifts once again for the addictive hit Ivy & Gold.

The rest of the album continues in much the same low-key acoustic vein, with highlights including Leaving Blues, a simplistic story-teller with melodic harmonies, and a like-for-like rendition of John Martyn‘s Fairytale Lullaby. But aside from these gems, there are few surprises to be had on an album that repositions Bombay Bicycle Club somewhere between Damien Rice and Mumford And Sons.

An experimental, but nonetheless well crafted album, Flaws is a reflection of lead singer-songwriter Jack Steadman’s early musical influences. It’s a mature progression for a talented band who, having started out at the tender age of just 15, now seem much clearer on which direction they want to take.