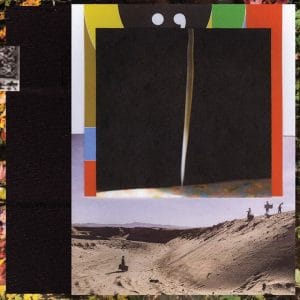 Like others in the ‘mopey vanilla’ school of indie-folk, especially Fleet Foxes, Bon Iver have always threatened to become the boring caricature of mid-2000s soundtrack rock that people who don’t care for them have always accused them of being. On new, unfortunately titled album i,i, Justin Vernon has succumbed to his most inane impulses – and released a selection of unseasoned, lightly scented pleasantries that neither hit or miss. They just are.

As has been his wont of late, the list of guests on the album is large, ranging from previous collaborators James Blake and members of The National, to new folks (sampled vocals from Velvet Negroni) and some others you’ve probably never heard of before.

As with all of the previous Bon Iver albums, there are wordless moments of pure bliss, gentle lullabies and stirring, sky-gazing hymns. There are nostalgic themes, vaguely political couplets, elegant phrases and wretched high school poetry. But on i,i, it all adds up to a facsimile of what Vernon and company have done before, and done better.

U (Man Like) intends to be much stronger than it is. It has some inadvertently funny lyrical witticisms, and a sense of stately grandeur, but it’s too plain to satisfy. Marion, one of the few highlights on the album, is ruined by its harsh digital production – it’ll probably sound incredible live, with its wistfulness and country-spun homeliness allowed to shine through. In fact, if you get yourself over to YouTube, there’s already an acoustic cover by a guy in his bedroom that sounds much better than the version on the record.

Of the other material, the successes come from iMi, which has a ghostly, disembodied vocal, Salem and Jelmore, which are familiar, comfortable retreads of old ground – particularly Vernon’s light touch and steady hand. Elsewhere, Holyfields has a fantastic (if a little wasted) crescendo, while Hey, Ma has a charming buoyancy, lightly propelled by the insistent rhythm.

Hey, Ma is one of the only tracks that will last into future setlists, one imagines, as it is the only track that could displace some of the best-loved, road-worn material from his previous (admittedly fantastic) albums. However, i,i suffers primarily from direct comparison to all of Vernon’s previous work. Perhaps this is a problem with the listener – where Vernon has been on top of his game for so long that only genius-level output will satisfy, or perhaps it’s a problem with music this profound, this open.

There will be, and have been, fierce champions of this album, in the same way that there were champions of the most recent album by The National. But i,i and I Am Easy To Find will fade over time and be replaced by newer, better albums, and order will be restored in the universe. Not all music this sincere has to be this dull.