Bon Jovi – What About Now 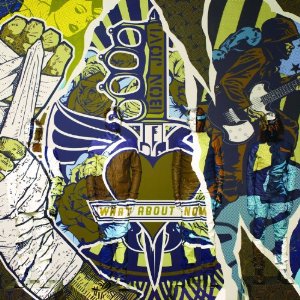 From Madison Square Garden to the dingiest of working men’s clubs, at one point or another each has been filled with the soft rock anthems of Bon Jovi. The hits off 1986’s Slippery When Wet are engrained into the minds of all; with Living On A Prayer, You Give Love A Bad Name and Wanted Dead Or Alive all on the same album it’s no surprise it spent eight weeks at Number 1. The band has been reaping the rewards ever since, and now they’re back with their 12th studio album What About Now.

Because We Can starts the album off with that Sheryl Crow brand of country rock that dominated 2010’s Lost Highway. Although uplifting, the lyrics have something of a Disney vibe to them: “I don’t wanna be another wave in the ocean, I am rock not just another grain of sand.” The track features a manufactured clap/sing-along outro that would work just fine in giving the middle aged fan an ideal workout number. The country feel continues on What About Now, a plodding ballad where the band have gone for an epic U2 sound. Again it’s hardly Shakespeare in the lyrics department, but there is a nice Bruce Springsteen reference: “You want to start a fire, it only takes a spark.” So far, so stadium.

The first standout track is plodding ballad I’m With You; a future shower-song classic with its irresistible chorus of ‘oooohs’. It’s also the first time we really notice Richie Sambora, who pulls off quite a tasty, if rather safe wah wah infused solo. Amen signals the first acoustic ballad which dried up ’80s soft rock fans and young soppy teenagers will love; it’s nothing too complex to grasp lyrically, although it does sound like he’s singing ‘Amy’ rather than ‘Amen’ – sought that diction out, Jon. However, Pictures Of You takes it too far with its teenage girl poetry: “I feel just like Picasso, and you’re my masterpiece, I painted it a lifetime, what is left is memories.” Even for Bon Jovi, this is way too naff.

That’s What The Water Made Me features yet more of Sambora’s clichéd, studio guitar sound, although What’s Left Of Me is intriguing with its metaphors: “I miss the smell of paper and the ink on my hands.” Jon also laments “I ain’t checking out, I still got my dreams”. Relatively speaking it’s quite a deep track, but all the motifs discussed about not being too old to have worth just reek of irony as the veteran soft rockers pedal the same old stadium rock as they’ve been doing for the last 30 years.

No-one was anyone was expecting anything groundbreaking from Bon Jovi, especially at this stage in their career. As an album it’s as cheesy and manufactured as they come – the same could be said about most of their albums – but if Jon Bon Jovi sang “I should write down these words before I lose them, or write you a song just to use them” on the edge of your bed you’d probably go for it. And it’s very easy to imagine these songs working in a live environment, nestled between Bon Jovi’s greatest hits.

You’re sure as hell not going to swerve off the road if one of these songs shows up on the radio, but you might open the windows and turn the radio up, just a bit.