by Sam Shepherd
published: 14 May 2012 in Album Reviews
Tweet 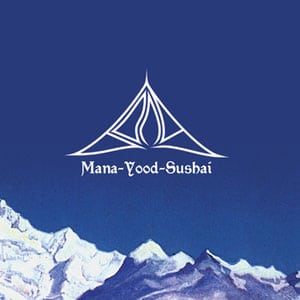 As their name implies, Bong are a band whose music should probably be accompanied with a hearty lungful of the good stuff. Not that such indulgences are entirely necessary to get a handle on Bong or their music, but such is the drawn out and hypnotic nature of these songs that a little gentle encouragement certainly wouldn’t go amiss in aiding the journey to the outer limits.

Bong occupy a place between the drone of Earth and Sunn O))) and the stoner groves of OM. Their music could be described as Droner, if you were so inclined. So although there are elements of both on Mana-Yood-Sushai, there should be enough of each to please fans of both genres.

Consisting of two monumental tracks, Mana-Yood-Sushai is an album that requires total immersion to fully appreciate. Dip in and out of it and the spell of these sprawling tracks is utterly broken, rendering the point of the album obsolete (assuming that the point is to cause a kind of waking coma). The album itself is based on the works of Lord Dunsany, most specifically The Gods Of Pegāna, and a deity by the name of Mana-Yood-Sushai who, according to the story, created all other Gods. He is kept in a slumber by constant drumming as the other Gods fear that should he wake he will begin to create again, but not before destroying everything he had already created. Admittedly, this all sounds a bit too prog to bear, but take the plunge and it’s hard not to get caught up in the swathes of noise Bong produce.

The first of the two tracks, Dreams Of Mana-Yood-Sushai, succeeds by sheer stealth. Built around an apparently endless droning note, the song slowly begins to add new layers of noise over the course of nearly 30 minutes. Touches of feedback are introduced, slight melodies from a Shahi Baaja become apparent, and eventually a low echoing chant starts to hang eerily in the air. It’s some time before drums are introduced, but when they begin to pound hypnotically, the droning note starts to evolve into a slowly undulating riff. The drums themselves are cacophonous, as one might expect them to be if their purpose is to keep deities in their slumber. Steeped in reverb and simply thunderous, they interact with the doom-laden chanting to create something truly disorientating; not unlike the swelling echo “BOUM” encountered in the Marabar Caves in E.M. Forster’s A Passage To India. From drone to relentless groove in the course of 30 minutes might sound somewhat protracted, but when caught up in Bong’s eerie haze it seems to pass in the slow blink of an eye.

Clocking in at a mere 20 minutes, Trees, Grass, And Stones is practically a pop song when compared to Dreams Of Mana-Yood-Sushai. Far less claustrophobic and foreboding than the opening track, it retains the slow paced drones and raw edged guitar swells but possesses a sense of openness and wonder. A rambling guitar solo soars over the laid back core of the song, juxtaposing free flight with an unstoppable grinding force. It might not be as forceful as the song that precedes it, but is nevertheless totally engaging and capable of invoking a drooling stupor.

Bong might not be doing anything particularly groundbreaking – the likes of Sleep, OM, Sunn O))) and Weedeater all occupy a similar space after all – but Mana-Yood-Sushai should be a welcome and worthy addition to the collection of anyone in need of drone induced slumber.