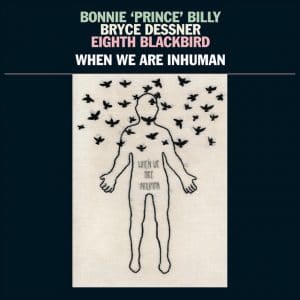 When We Are Inhuman, the new album from Bonnie Prince Billy, is a collection of his self-penned songs alongside traditional folk numbers. All of the songs are rearranged and reinterpreted by the contemporary classical ensemble Eighth Blackbird. This is neither a vanity project nor an extended jam session – it’s more of an outlet for an itch that just needed scratching.

The songs – here Oldham’s compositions are practically indistinguishable from their traditional counterparts – are arranged in a light, breezy, almost empty way, so that the focus of the listener is completely, wholly on Oldham’s voice. Despite the arrangements coming from two different composers (The National’s Bryce Dessner arranged the folk songs, whereas Oldham’s were arranged by Eighth Blackbird), they blend into a seamless, largely colourless sound.

The highlights amongst the set are few, but they are good: Beast For Thee, a perennial fan favourite about fucking, is now completely stripped of its horniness, its raucous sexuality, to the point that it is transformed into a hymn. A hymn to the power of attraction. Some fans of Oldham’s original might see this re-fashioning as heresy, some might see it as a successful experiment (the same goes for the whole album.) Arranged by Eighth Blackbird pianist Lisa Kaplan, the new version “is very different from the original,” she says. “We used the birdcalls of all the different birds named in the song, and the extended piano intro was inspired by my friend Thomas Bartlett.”

This is a hardcore album for the devoted only – and this review comes as Oldham has announced the release of his next album of completely original material. While overdue and incredibly welcome, it also means that When We Are Inhuman is now completely redundant:  this is an album of largely superfluous material, made only to exorcise some creativity.