by Thomas Ingham
published: 4 May 2013 in Album Reviews
Tweet 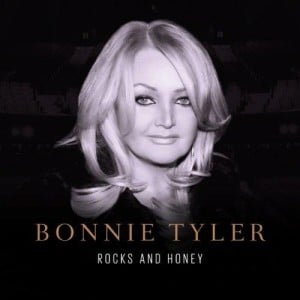 Country artist turned power balladeer Bonnie Tyler is one of music’s juke box elite, with a rack of hits to spice up any wedding reception. The infamous 40-a-day cackle that put her on the map was rivaled only by Rod Stewart‘s raspy vocals back in the day.

Rocks And Honey is Tyler’s 16 studio album and its business as usual for Bonnie. Sunshine is fairly indicative of the whole of the album and the majority of her ’80s output. The formula is simple – loud, quiet, loud, quiet. It explodes into a Bon Jovi-esque chorus, very reminiscent of I’m With You from their latest album What About Now. Tyler’s voice seems good for only one thing and that’s belting out gravely vocals; when she tries to restrain, it ends up with a Johnny Cash type croon (OAP Cash, to clarify).

Comparisons to other hairbrush heroes are inevitable; in fact Tyler’s biggest hit Total Eclipse Of The Heart was initially written for Meatloaf by Jim Steinman. Foolishly, Mr Loaf refused the track and the rest is rock history. To give her credit, she still retains that distinctive vocal that Meat Loaf lost some 15 years ago. Crying could have almost been a ’90s Steinman hit with its classic drummer-in-a-deck-chair rolls. The lyrical content is bog standard – “why do I still love, and where do I go from here” – typical soppy stuff. Although her voice is still unmistakable, it relies on fairly heavy backing vocals to give it some beef.

This album is more than just a nostalgia trip, of course; it carries the UK’s Eurovision hopes and dreams. 2012 saw veteran Engelbert Humperdinck come a poor, but predictable 25th with Love Will Set You Free. With the pressure off, Bonnie has nothing to lose with Believe In Me which is, unsurprisingly, the highlight of the album. It strays away slightly from the stodgy ballad and has a catchy pop quality that’s pleasant, but is nowhere near novelty enough to strive at Eurovision.

There are but two modes on this album. It’s either cheesy ballads or country pop-rock. Flat On The Floor is amongst the latter, with crunchy guitars and pounding kick drum, it’s all terribly clichéd, but worryingly catchy. Again it’s fairly naff, but at least it breaks up the monotony. Power ballads should instil the listener with the feeling they can do anything, but there is a limit to how much you can take in one sitting before you just need a lie down.

It’s all formulaic stuff, but tracks like Lord Help Me and Love Is The Knife are just clutter, and really miss an over the top hair metal guitar solo. Yet the most extraordinary thing is that she has any vocal chords left at all, and for fans this has everything they need. At the risk of stating the obvious, she has no chance of reversing the Eurovision trend.

Rocks And Honey is Bonnie Tyler doing what she does best. If you dig ’80s anthems, here is a solid record for the collection. It’s nothing more, nothing less.