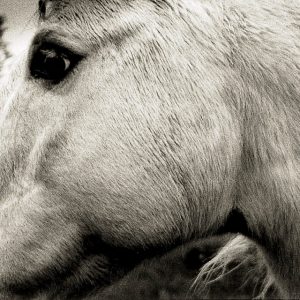 It’s been 10 years since Anaïs Mitchell released Hadestown, an album that somehow took on a life of its own. Mitchell developed her work into a stage musical, which debuted off-Broadway in 2016 and enjoyed a wildly successful run at London’s National Theatre in 2018 before moving to Broadway last year, whereupon it was festooned with awards.

One of the pleasing after-effects of a successful project like Hadestown is its bestowing of freedom upon the artist to choose what comes next. And, for Mitchell, what comes next is a understated little record with two friends: Eric D Johnson of Fruit Bats, and Josh Kaufman, a musician who’s worked with The National, The Hold Steady and Josh Ritter.

Bonny Light Horseman came into being when the three members all appeared at Bon Iver lynchpin Justin Vernon‘s Eaux Claires Festival in 2018, and began discussing the idea of collaborating on an album which revisits traditional British folk songs, some of which date back hundreds of years. This is all well-trod territory for Mitchell of course (2013’s Child Ballads performed a similar job), but the joy of Bonny Light Horseman is hearing how the three protagonists make these songs sound bang up to date.

The arrangements are all pretty sparse, being mostly built around acoustic guitar and piano, with the odd saxophone solo occasionally arising. It works beautifully, with those arrangements allowing the band’s vocals to soar. The Johnson-led Deep In Love is particularly lovely, with the Fruit Bats singer harmonising beautifully with Mitchell. The fact that it was apparently recorded in one take makes the song even more impressive.

Even though these lyrics were written hundreds of years ago, they remain easy to identify with. Johnson has described The Roving as “like the plot of an ’80s teen movie”, and it’s true that lines like “I knew her love was changing, by the roving of her eye” sound like they could have been written by a modern-day troubadour. Similarly the title track, originally written as a lament to the Napoleonic Wars, could easily be reimagined today as an anti-war protest song.

Jane Jane is probably the most ‘traditional’ song on the album, with a nursery rhyme-style hook, while the languid, laid-back Magpie’s Nest has an almost cinematic sweep to it. The latter is another track in which Mitchell and Johnson harmonise beautifully – in fact, one of the big pleasures of this album is listening to how well these two very different singers gel together.

There’s even room for a guest vocal from Vernon, the man whose festival gave birth to the band, on the almost a cappella, gospel-tinged Bright Morning Stars. And there are guest spots too from The Staves, Lisa Hannigan and The National‘s Aaron Dessner – names which will probably tell you whether Bonny Light Horseman will or will not be your cup of tea.

For this project is very much a tasteful, laid-back affair pretty much tailor-made to anyone who’s ever swooned along to a Bon Iver or The National song. It’s true that the steady pace of the album may turn some people off (there’s barely any percussion to be found on the entire record), but for folk fans especially, there’s a rich vein of history mined on Bonny Light Horseman that makes for rewarding listening. Some songs, after all, are just timeless.