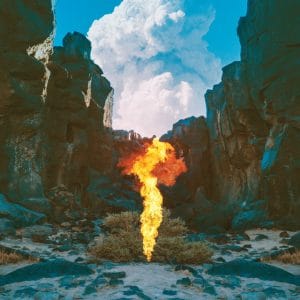 Now fully established in the electronic musical firmament, Simon Green has his sights set on greater things. With five well-received albums already under his belt, the man otherwise known as Bonobo makes a notable step up in ambition with Migration, an album described by his record company as “an attempt to capture the very textures of human existence in his work”.

Green has always gone about this work in a relatively humble way. Interviews with him are relatively rare, but when he performs live the tickets are gone in a flash, an indication of how far reaching and affecting his music can be. He has so far achieved that rare balance of making music that calms the head, but ends up moving the soul simultaneously. So how does Migration develop this process?

For a start the familiar Bonobo moods are still there, of sober reflection and thoughtful poise. Yet there is even greater assurance and depth to his work now, and, on the likes of Outlier, a restless energy. In this respect his musical delivery is moving in the same direction as contemporary, friend and LA neighbour Jon Hopkins, whose Collider is effectively a cousin of this track. Both have similar edgy qualities, a longer duration and the power to move the feet as well as the mind – and Outlier is one of the very finest Bonobo offerings yet, with its shuffling beat and urgent, intertwining melodies.

Hopkins does in fact appear on this album, the measured tones of his piano audible on the title track, which has both clarity and beauty. It is one of the rarer still moments though, as the likes of Kerala have a strong underlying movement despite some restful harp strumming.

Kerala was the area that inspired Migration’s title, and it has had a lasting effect on Bonobo, for not only do the tracks touch on the idea of a restless need to move, they start to think outside Western cultures too. Ontario is a beautifully crafted instrumental example, but much more explicit is Bambro Koyo Ganda, where Moroccan band Innov Gnawa integrate their vocals seamlessly with a harder percussion track.

The wasteland of Death Valley also casts its spell on the album, the music giving off some of its distinctive dry heat, reflected in the album artwork which was shot there. It’s easy to imagine the harp on Break Apart as supplying water in the desert, even before Rhye’s beautiful, sotto voce delivery comes in.

Once again the vocalists are well chosen and pleasingly far from the ‘A’ list. They deliver emotionally and technically, with nice touches to songs such as No Reason, where the husky top edge of Nick Murphy’s voice adds an extra level of feeling.

Green’s use of analogue orchestration continues to flourish, too, giving a living, breathing centre to the music. The likes of Second Sun – which could easily be a moment for a Café del Mar sunset – leave a lasting impression, while the subtle colours and textures applied to Break Apart and Grains are beautifully rendered.

Overall, Migration represents another step forward in Bonobo’s musical development, keeping what was already strong in his music but adding more colour and depth. He is making music for the mind and the soul, but increasingly for the dancing feet too. In short, to experience an album of his is to enjoy an all-encompassing physical and mental boost.