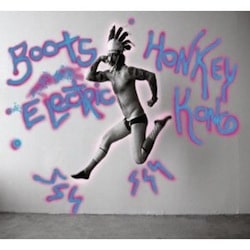 It’s hard to guess the potential motivations behind a thing like Honkey Kong. Jesse Hughes is best known for his mullet in Josh Homme’s goofball side-project Eagles of Death Metal, but since that particular divergence has stayed quiet since 2008’s Heart On, his maiden voyage with Boots Electric can be read as something of an economic necessity; think the late-‘00s batch of Strokes solo albums. The brief, 32-minute Boots Electric repertoire subscribes to the same broad, bulky splurges we’ve come to expect from Hughes, but this time with a bit more mainlined eccentricity.

The stuff on Honkey Kong is almost aggressively breezy. Nothing flaunts for a second look or hits a sour note, and that’s by design; Hughes is interested in crafting party music at its most digestible, venturing beyond the dirty glam of his primary outfit. We get pervy, spandex electro-funk with Boots Electric Theme, or dusty, croon-rock Little Richard-isms on Speed Demon – big, stupid monuments to antiquated (but still fun) pop-music traditions.

Hughes has an unprecedented crush on every cheesy corner of music’s sprawl, but he never takes it too seriously. No Ffun announces itself with the same Phil Specter drums that begat Be My Baby, before stumbling down an almost too-close-for-comfort tale of low self-esteem, ostensibly because he thinks it might make for a good joke. The tone is kept light, and often free of expectation, which allows Hughes to pilot Boots Electric towards a complete embrace of his silly, sometimes half-baked ideas.

But the success of a record like Honkey Kong is measured in silly, sometimes half-baked ideas. Jesse Hughes is a character – a sweaty, sex-obsessed weirdo singing gleefully overdramatic songs. The closer Swallowed By The Night is practically a satire of ego-fueled rock-star pathos. He goes out on a violin and a chorus of howling dogs. Listeners willing to be swept up in the brief, tongue-in-cheek legend of Boots Electric, will probably find a lot to like. For its blatant superficiality, its sound stays locked into a remarkably well-defined place, somewhere between the puffy sex-fantasies of Prince, the pound-it-out attack of Jerry Lee Lewis, and Hughes’ own raunch with the Eagles of Death Metal.

However, Boots Electric rarely comes off as transcendent, only really succeeding with prior knowledge of Jesse Hughes’ image. The project is more than a product of an unexpected hiatus – the record is too tied in with a concept to be an afterthought – but nothing sticks for long. Sure, Hughes isn’t really in the business of sticking, but that doesn’t really excuse the lack of grooves. It’s got propulsion behind it, but Honkey Kong lies as a spectacle that’s about as ignorable as it is neon.