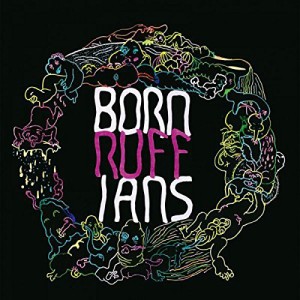 Across four albums, Canada’s Born Ruffians have honed a distinctive sound that combines hyperactive melodies, yelping vocals and snaky guitar parts. Their new one, RUFF, is the ne plus ultra of Born Ruffians albums: 11 scrappy guitar anthems bashed out in just three weeks in a Toronto studio and with nary a keyboard within earshot – just Luke Lalonde’s inelegant-yet-eager vocals, Andy Lloyd’s tightly-coiled guitar and the puppyish rhythm section of Mitch Derosier and Adam Hindle.

Born Ruffians’ sound is likely to divide listeners. Some will hear unwelcome echoes of the ‘landfill indie’ scene that plagued the mid-to-late noughties and run a mile. Other, more patient listeners will recognise the band’s enduring way with a hook and find plenty to enjoy, despite some obvious duds along the way.

Opener Don’t Live Up is propelled by a two-note guitar refrain and a hiccupping, chorus redolent of Talking Heads. Yawn Tears – boasting the notable lyric “watch the moon rising with my hand on my cock” – resembles Razorlight on an aural diet.

We Made It and (Eat Shit) We Did It are catchy guitar anthems par excellence – the latter song, impressively, builds a hook out of its titular refrain. & On & On & On is a torrent of hooks that falls on the right side of annoying by a hair’s breadth.

There are occasions when RUFF goes horribly wrong. Lalonde’s lack of technical skill as a vocalist is easy to overlook during the album’s many uptempo numbers, but his honking vocals only serve to sink the downcast When Things Get Pointless I Roll Away. Worse still is Shade To Shade, a borderline-unlistenable power ballad that makes The Cribs sound like Sade.

Still, these missteps are easy to overlook on an album that’s chock full of musical ideas. RUFF will win no prizes for compositional elegance, but it’s never boring.