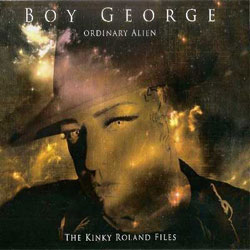 To say it’s been a bad few years for Boy George is something of an understatement. Ever since he was pictured – flaky skinned and bloated – doing community service in New York, the world has watched his downward spiral with the kind of fervour usually reserved for rubbernecking at the twisted wreckages of cars on the motorway.

Arrested for assault, imprisoned, forced to wear an electronic tag and even, it is rumoured, turned down for Celebrity Big Brother (what greater shame), it’s safe to say that events in his private life have overshadowed his work as a musician. Sadly, Ordinary Alien, his first album for more than a decade, is unlikely to revive his fortunes.

A strange mixture of reggaeton, trance and house, the album sounds like it’s been made by someone who doesn’t know the party is over. In Boy George’s head it’s clearly the late ’90s or early ’00s, a place where Chicane and remixes of Bob Marley still rule and everyone lives in an ecstasy fuelled Club Reps style bubble. The places he draws inspiration from are a strange mix of old and new – electro, drum and bass, hard house, euphoric dance. None gel together in quite the way he thinks they do. It’s music for being on ketamine to and, while there’s no denying there are places for such soundscapes, it’s largely intolerable to listen to as a piece of work from beginning to end.

Opener Turn To Dust, a cod reggae/dance mash-up full of regurgitated and dreary bits of psychological wisdom (“Hatred must turn to dust”, “I will stand up tall” &C.) lacks the emotional punch it’s aiming for and just seems rambling. So does Amazing Grace (“It was just another ordinary day/ How did you know your life was going to change?”). They make Ordinary Alien feel like a 12-step self-help programme being put to music. It’s rather like having someone who has found God bending your ear for hours about their newly awakened spirituality. You want to grab Boy George and tell him to save it for his diary. The relentless Mr Motivator act is perhaps at its most cloying on Yes We Can, a squelchy electro pop pile of nonsense that samples Barack Obama in an attempt to give itself magnitude and then drags in a choir to ram home the message of hope, peace and love maaan. It is truly dire.

Worse is to come. Perhaps the most distressing moment on the album is a reworking (for want of a better word) of Fleetwood Mac‘s classic Go Your Own Way – done as a hands aloft rave anthem. It’s so bonkers that it should work, but sadly it just comes off as cynical and depressing.

The truth is that fans of Boy George will stick by him no matter what. For them, Ordinary Alien will be received as a work of genius, and that’s fair enough. The man has made such an effort to sort himself out that it feels wrong to kick him when he’s trying to get back up. Except we know that he’s better than this. Fans and casual listeners alike deserve more than this bargain bin offering. Maybe it’s time for the flamboyant frontman to admit that his best days of music making are behind him.