Boy George – This Is What I Do 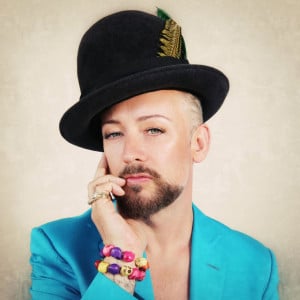 This Is What I Do is being heavily trailed as Boy George’s ‘comeback’ album, with every press release and interview noting that it’s his first solo album of new material in 18 years. He certainly hasn’t been idle in that time (packing in various curio albums, a successful DJ career, two volumes of memoirs, the musical Taboo and a reuniting of Culture Club) but it’s no great surprise that he might want to skip over the period.

To a whole generation (or two) Boy George is most famous as a tabloid figure, known more for his drug habits, criminal convictions and Twitter spats with One Direction and Lady Gaga fans than for being the pop icon who sold millions of records and helped define the ’80s. At one stage he seemed resigned to this fate and was only prevented from appearing on Celebrity Big Brother due to being on probation at the time – a turn of events which he must now surely be thankful for, given the depths to which even that disreputable show has fallen.

Now, clean and healthy to the point where he no longer needs the thinning neck paint with which he was associated for so long, he’s determined to set things straight. The album title makes clear his agenda to reclaim his reputation and legacy from the disrepair it has fallen into. Any inkling that this might mean whitewashing his past is quickly proved wrong, with opening track (and lead single) King Of Everything’s first line being the weary sigh of “Put down the booze, let the demons win the fight”. His voice is immediately striking, what was once so smooth and pure now a deep, ravaged timbre which captures his weary experience; it fits the stately song perfectly. It’s easy to imagine that Boy George is addressing his fans here in lines like “I made an art of letting you down”, while the chorus’ pondering of “Have I lost my crown or will I be king again?” makes the autobiography all too explicit. It’s powerful and heartening stuff.

His status as a recovering addict looms large over the album, with so many lyrics of self-empowerment and homilies like “If you don’t know where you’re going, any road will take you there” (Any Road) that it can feel as if he’s swallowed several self-help books. Completely understandable, of course, but at several points the lyrics invoke Culture Club’s dreaded The War Song in their triteness. My God aims to skewer sanctimonious people of faith but the imploration “put your bombs away, you need a little more faith” gives a sense of the level of insight. The shuffling, slinky percussion of Bigger Than War threatens to drown beneath its “love is bigger than war” platitudes but is rescued by the wry “bigger than The Beatles, the Rolling Stones, bigger than Elvis… not Yoko!”

The reference to Yoko Ono is clearly no spontaneous aside as also present is a cover of her doleful Death of Samantha. It’s given a successfully moody treatment here, its lyrics neatly hinting at Boy George’s own emotional damage. The alluring lilt of original song It’s Easy is similarly strong, its rich melody and angelic backing vocals surprisingly bringing to mind late-period Leonard Cohen. Elsewhere, however, we return to the reggae touchstones of Boy George’s career (with Do You Really Want To Hurt Me and Everything I Own being his first hits respectively with Culture Club and as a solo artist.) Live Your Life, Nice And Slow and Love And Danger are all very much of a kind: mid-tempo pop-reggae confections with lyrics which allude to his ‘darkness’ (the latter explicitly states “I got addicted to love and danger’). They’re enjoyable enough but the aggressive dancehall-tinged My Star and the dub influences of the final, spirited track Feel The Vibration are more exciting (the penultimate, meandering Play Me admittedly provides a stark contrast to the latter.)

The album, then, is a bit of a mixed bag but does enough to deliver on its mission statement. It may not be particularly adventurous or vital, yet there is undeniable charm in its sense of a once-great pop star beginning to correct his course. It will take more than one album to remind audiences of Boy George’s often brilliant abilities, but This Is What I Do is foundation enough for more.