Boys Noize – Out Of The Black 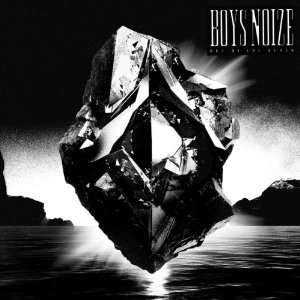 Boys Noize, aka Alex Ridha, has fast become one of the most popular names in dance since coming to the fore in the mid-00s. In addition to his first two well-received albums, Oi Oi Oi and Power, he has also gone on to act as remixer for artists as diverse as David Lynch, Depeche Mode and N.E.R.D whilst also acting as producer for Scissor Sisters and Santigold to name but a few.

Now he’s returned to crafting his own work with his third effort, Out Of The Black – a menacing electro LP. These aren’t so much just twelve tracks but deadly weapons for the clubs (none of these are perhaps as persistent as the aptly-named Missile, which is the sound of military drums being rattled out like gunshots). There’s nothing that is groundbreaking nor is there anything necessarily intriguing about it. This should be accepted purely as something to dance to at 1am in the morning.

In other words, Ridha knows what his audience wants from him and he’s more than happy to oblige with some huge and monstrous anthems. XTC is a bona-fide banger thanks to a dirty bass kicking in after the drop. Stop is spiky, loud, thumping and unrelenting whilst Touch It contains hints of both Daft Punk and Justice but those influences have been fed through German machinery. There’s nothing that will shock you except for the very end when Snoop Dogg makes a brash and in-your face introduction. His guest vocal contributions can be hit or miss but his rhymes on Got It are delightfully tongue-in-cheek

Perhaps inevitably, the strength of its high points makes the weak spots even more obvious. Conchord, with tribal drums and all, is certainly ear-splitting but it doesn’t add anything new to the mixture. Merlin is a sprawling tune that builds up steam, relaxes in the middle and then goes all out for the last two minutes. Unfortunately, Reality, which is right before it in the running order, does almost exactly the same thing. It might have been a lot better to chop one and keep the other.

Some fans are probably wondering if there’s anywhere else for Ridha’s sound to go, given that this isn’t a bold new direction for him. If there isn’t, does it really matter? The answer, based on Out Of The Black, is slightly tricky. There is both evidence of some knockout club anthems and some duds. The best move would be to arguably burn the best tracks rather than sample the whole thing. However, as soon as that Ghostbusters-esque melody line kicks in during What You Want, you’re hooked and it becomes increasingly difficult to want to press the skip button. There is still a huge amount of enjoyment to gain from Boys Noize and that overrides some of the consistency issues.