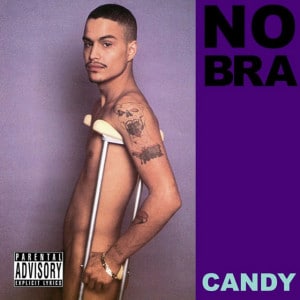 You have a friend, right? A friend that digs Throbbing Gristle, and could proselytize and preach and honk and howl about how 20 Jazz Funk Greats is the pinnacle of their artistic synthesis of aggression and desolate ennui? Do they also like JG Thirlwell, Nico, James Chance And The Contortions, early Lou Reed, Lydia Lunch and a whole heap of other hip noise terrorists? Find out if they do – firstly to congratulate them, and secondly because No Bra, the project of one shirtless she-devil, is their new favourite thing.

No Bra is ‘gay icon’ Susanne Oberbeck’s baby. Her evil baby. And it’s coughed up this new work hot on the heels of love: raised on a horrid diet of free jazz, No New York and industrial grinders, this creation is just as happy sitting and playing with sunny pop hooks and dubby bass, all the while nurturing the mental scars of the malevolent exploits of auntie Genesis. Oberbeck’s confrontational tendencies were first showcased on 2006’s long-player Dance And Walk and 2009 single (and Suicide cover) Super Subway Comedian, which she produced as part of the ongoing tribute to Alan Vega, in honour of his 70th birthday. So far, so cool.

The music is where most people find fault with No Bra – because her reputation as an artist, her previous collaborations and her list of influences are all flawless. But music that challenges rather than sympathises will always leave pissed off listeners and baffled reviewers in its wake. And so it should.

The mutant dub of opener Minger sets the tone for the record – Susanne’s detached vocal barely gets above a mumble, while the wobbling bass and rattling drum kit pound out a fat groove. Lyrics about murder aren’t so hot at the minute, so they’re welcome here. Candy, which follows, opens with haunted-house keyboard sounds, a hammering synthesised beat and develops into TG-esque delirium-inducing horror music. The vocal delivery on Candy is set to ‘creep-out’ but ends up sounding pretty funny, in a macabre kind of way. Nobody delivers lyrics this way without their tongue firmly stapled to their cheek.

Date With The Devil is a tale about how selfish Satan is, set to a grinding rhythm. Oberbeck’s dry, cracked delivery here is sublime – and the track itself sounds like Beck writing for Nico, such is the off-kilter vibe and wailing chorus. Her cover of Super Subway Comedian pops up on the record too, after Do The Dog. Do The Dog has a childlike quality at points, the musicality and not-chords become so random – at other points it’s Oberbeck begging her baby to squeeze her sausage or put her out of her misery. Charming. Super Subway Comedian, with Batman-theme-tune guitar stabs and dub bass tie up with moaning sax and the lyrical nuttiness to impressive effect.

This record is not only a hoot, but a treat: rarely (outside of a few select artists) does music this aggravating, infuriating and challenging make for such an enjoyable ride. Oberbeck has a rebel attitude, be it affected or authentic (she’s not the first, and won’t be the last, to expose her breasts during a live performance), and that goes a long way. It’s a record that comes close to the knuckle on a few occasions, but for industrial people, that’s nothing new (however, there’s nothing remotely close to carving-knife surgery on a seven months pregnant woman). It’s surprising, but Candy is largely great, with a handful of immaculate tunes: and as anybody will tell you, when it comes to No Bra, more than a handful’s a waste.

No Bra MP3s or CDs

No Bra on Spotify

More on No Bra
No Bra – Candy