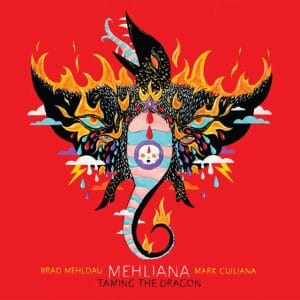 Although mainly acclaimed for his pioneering contribution to the contemporary acoustic piano trio, Brad Mehldau has always been a musician open to experimentation and intriguing diversions. He has drawn fresh inspiration from a range of modern music, collaborated with vocalists and produced lushly arranged, slickly produced epic suites such as 2010’s Highway Rider.

Mehldau’s collaboration with the fiendishly groovy, nuanced and dexterous drummer Mark Guiliana mainly finds him on vintage keyboards (Fender Rhodes) and a range of synthesisers (notably the Prophet 8). Guiliana is a brave and innovative musician whose trio Heernt have expanded the vocabulary of contemporary jazz crossover music, but he is perhaps still best known in the UK for his appearance on the Phronesis Alive album. Although the duo have been performing live together for some time (and their rapport seems thoroughly ingrained as a result), Taming The Dragon is their debut recording.

This is the sort of extracurricular venture that will naturally divide opinion. Any purists with little tolerance for electronics and fragmented structures will undoubtedly prefer Mehldau’s trio work. For those with less prescriptive tastes, there’s something liberating for both musicians in this duo setting and a clear sense of mischievous fun amidst the heightened claustrophobic tension.

The music here is unconventional in that the melodic development is mostly fractured, with as much emphasis placed on sound and effects as on the actual musical detail. Mehldau frequently experiments with short, clipped phrases that are then answered or accompanied by sub bass echoes. It is a very different sound world from the sustained lines of his trio improvising. Whilst it would be inaccurate to say Mehldau is out of his comfort zone here (particularly given how successful these pieces are), he has certainly found a space where he cannot resort to existing habits.

Taming The Dragon is also wholly absorbing, as Mehldau’s playfulness and Guiliana’s taut, interwoven grooves create an inescapable tension. Pieces such as the delightful, slow building Hungry Ghost even seem to draw from the approaches of post rock acts such as Sigur Rós or Tortoise. The use of sampled voices and stories (narrated by Mehldau himself in a delightfully dry tone) serve to enhance the mysterious atmosphere. The opening title track begins with Mehldau describing a ‘trippy dream’ in which he is driven around by a dude resembling a cross between Dennis Hopper and Joe Walsh. A road rage incident sparks a moment of amateur psychoanalysis as Mehldau considers the competing voices of anger and moderation ‘vying for your attention’. The music veers between awkward, skittering chatter and a full, freewheeling charge.

The instrumental and electronic elements are so well integrated that, at least in Guiliana’s case, it can be a challenge to distinguish between programmed rhythms and material performed ‘as live’ (especially on the frantic, thrilling You Can’t Go Back Now). Part of this spellbinding confusion is the extent to which Guiliana has absorbed the tricky detail of typical contemporary electronic drum patterns. He is also able to utilise a wide variety of sounds from the kit, from clicks of the drum rims and mini-cymbal work to a substantial dynamic and textural range on the drums themselves. His playing, although often bristling and very active, always neatly complements Mehldau’s intricate multiple synth arrangements. Guiliana opens up the musical possibilities of kit playing, with thoughtful phrasing and complex, fascinating groove parts.

When they appear, the moments of calm and clear beauty are refreshing. The relative brightness of The Dreamer – with Mehldau on piano – becomes almost dazzling in context, and its narrative about the dreamer discovering a music that ‘can make him fly’ in dreams is curiously powerful. Both the haunting Elegy For Amelia E. and no less haunting Sleeping Giant have lovely undercurrents drawn from the blues.

So, there is both old and new language at play here, and an intuitive, compelling dialogue between the two musicians, and between the musicians and their machines. Yet for all its underlying menace, Taming The Dragon also communicates tremendous warmth and empathy.