by Christopher Monk
published: 19 May 2015 in Album Reviews
Tweet 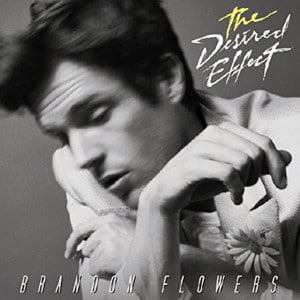 Brandon Flowers’ usual job as front-man of The Killers is going just fine. They’ll never again reach the artistic or commercial peak of their first few singles, but they’ve arrived at the rarefied position of seemingly having the headline slot at the V Festival on permanent reservation, irrespective of the performance of their latest album.

In contrast, Flowers’ career as a solo artist is in need of a boost. His first solo album – 2010’s Flamingo – was a damp squib, being neither tuneful enough nor sufficiently distinctive from The Killers to make much of an impact. Flamingo’s follow-up The Desired Effect arrives accordingly with a huge amount of purpose. Put simply, Brandon Flowers is not messing about this time round.

There’s the album’s title, for a start; the presence of a producer, Ariel Rechtshaid, who’s been involved in some of the best pop albums of recent times (HAIM, Charli XCX, Sky Ferreira), alongside a crack team of musicians and guest stars including Neil Tennant (who contributes a blink-and-you’ll-miss-it vocal turn), esteemed drummer Joey Waronker and master keyboardist Bruce Hornsby.

Freed from The Killers’ rock group configuration, The Desired Effect finds Flowers revelling in a succession of ’80s pop references. 30- and 40-something listeners will have plenty of fun identifying these; everyone else will revel in just how good The Desired Effect sounds.

Opener Dreams Come True boasts huge bursts of gleefully synthetic brass that sound like they’ve been rescued from a Stock, Aitken & Waterman production and plumped up with steroids. I Can Change features an interpolation of the famous keyboard hook from Bronski Beat’s Smalltown Boy. Still Want You opens with the kind of wonderfully kitsch keyboards that are all over Kate Bush’s ’80s output. Elsewhere, there’s fretless bass on Between Me And You, a gospel singer performing brilliantly pointless histrionics in the background of Lonely Town, while Diggin’ Up The Heart is a spot-on Xerox of The Cars’ ’50s-by-way-of-the-’80s new wave rock ‘n’ roll.

All of which would be for nothing if the songs weren’t up for scratch. Fortunately, Flowers now has the tunes to match his undoubted solo star potential. Lead single Not Gonna Deny My Love is the best thing Flowers has been attached to since The Killers’ 2006 hit When You Were Young. Elsewhere, Dreams Come True is the musical equivalent of liquefied Haribo: a big, shiteating grin of a song. Diggin’ Up The Heart chugs along like a lost drivetime radio classic, Lonely Town boasts a delicious chorus hook and Never Get You Right is so unashamedly optimistic that any cynical resistance is futile.

Expectedly, given The Killers’ habit of padding out their albums with forgettable dross, there is some filler. Between Me And You brings forth the unfortunate spectre of ’80s balladeer Paul Young, while Untangled Love huffs and puffs to little avail.

But, overall, this is arguably the most consistent album Flowers has ever been involved with. The Desired Effect has no qualms about its quest for chart dominance and, for a performer who’s never hidden his ambitions, it’s a good fit.