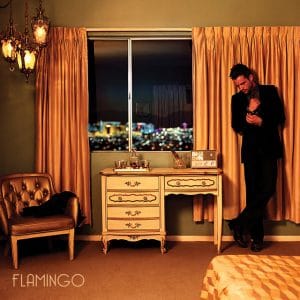 Brandon Flowers, the golden-throated frontman of The Killers, has stepped out on his own. No worries to longtime fans, though: the throwback synths are still in full swing. So what happened to his bandmates this time around?

Apparently, they needed a bit of rest after years of touring and recording. So Flowers kicks off his solo career with Welcome To The Fabulous Las Vegas, a plodding anthem of an opener that recalls the grandiosity of Elton John‘s Funeral For A Friend / Love Lies Bleeding, with layers of sparkling keyboards, crunchy guitars, and shattering percussion. Conjuring up that famous mantra of American hospitality, Flowers croons “Give us your dreamers, your heartaches and your sin” as chimes start sounding off, and then a deliciously ’80s guitar solo carries the song out. The overall effect is a certain level of sincerity that stops just short of Meatloaf-type mock operaticism.

Although this is a solo album, the material is not much of a stretch of the imagination away from normal Killers fare. It’s similar to Thom Yorke‘s solo effort: where Yorke was able to focus more generally on an electronic approach to songwriting than with his Radiohead bandmates, Flowers is here able to bring his brand of synthpop to more of an extreme without having to worry about indie-rock sensibilities. The result is a collection of charming tunes that hold together well even though there aren’t standout tracks with deep hooks like Mr Brightside or Somebody Told Me.

Flowers expands on his already effective lyricism on Flamingo. Playing With Fire shines especially bright, with a poetic folk influence that sprouts lines like, “Those charcoal veins that hold this chosen land together may twist and turn but somewhere deep there is a heart”. It’s an unstructured song that starts as a sparse tune and wanders in and out of a bright, soulful chorus. Despite the album’s opening track, which welcomes listeners to Las Vegas, many of the tunes on Flamingo suggest an unsettled spirit – Playing With Fire takes its time to explore instrumental sections, without a rush and without a definite direction.

Urgency is usually an important factor in music, but somehow Flowers succeeds in constructing songs that don’t have a definitive path. Songs change direction quickly; most choruses are boosted with more instruments and more volume but without build-ups before or decrescendos afterwards. The album has an interesting production that extends through slow-burning ballads like Crossfire and into upbeat pop tunes like Was It Something I Said?, which bounces along with goofy keyboards that sound like they’re taken straight from an old video game.

It’s clear from Flamingo that Flowers accounts for the lion’s share of talent in The Killers, and if they ever go on definite hiatus, their fans can look forward to more consistently good material in the form of Flowers’ solo albums.