Brassy – Got It Made 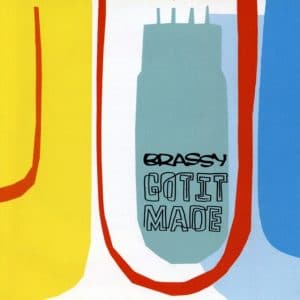 Finally! The word “anticipated” is an understatement when applied to this, the debut album from Brassy. How long have we waited?? Anyway, finally it is here and, quelle surprise, it rocks.

The CD has been released as a limited edition and, from our scouting about, seems to be quite a rarity. We checked several Virgin Megastores and HMVs and not a few independents and no-one had heard of the album, which is a real shame. Maybe somebody wants Brassy to be a cult. Who knows.

The first track, No Competition, gives a broad pointer to what we expect, full of Jonny Barrington’s scratching and the distorted vocals of the inimitable Muffin Spencer. Parkside’ doesn’t quite carry the enthusiasm of Brassy’s infectious live set, but all that matters little when Work It Out follows it, introducing Stefan Gordon’s garage guitar-playing, complete with huge riffs.

Various tracks from the first three singles/EPs appear in their original forms, so Work It Out, I Can’t Wait, the punk anthem Good Times and I Gotta Beef all rock. You Got It and That’s The Way also get feet tapping and arms flailing. A coda is made out of B.R.A.S.S.Y. which might have been left out and, for reasons I can’t quite understand, Secrets has been left off the album. This track is something of a turn-of-the-century take on Great Balls Of Fire, so to find that the album is without it is a shame. You’ll have to get the Bonus Beats EP to hear it. New track Nervous, however, makes up for this big time. Curiously, this is the track which leans most towards punk and away from hip-hop. So take a listen to track 11.

A gem of punk and hip-hop fusion then, with Jonny alternately spinning and scratching, drumming and sampling, Karen Frost with her ludicrously large bass screeching gurrly backing vocals over Muffin’s distorted rapping and singing and Stefan laying on the guitar riffs in a funky kinda garage way. It all adds up to a concise (17 tracks in just over 40 minutes) album of fun, energy and personality – three words that describe Brassy just perfectly.

More on Brassy
Brassy @ Garage, London
Brassy – Got It Made
Brassy @ Borderline, London
Brassy: “We’re the ones who write the songs, but we don’t get any of the money” – Interview