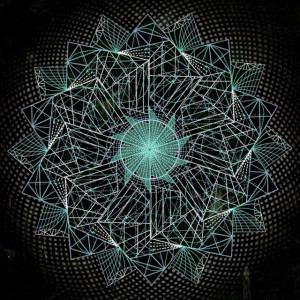 When I Break Horses appeared in 2011 with their debut album Hearts, they were clearly indebted to the shining lights of shoegaze (most notably, My Bloody Valentine). Not that the clarity of their influences was a problem, the duo of Maria Lindén and Fredrick Balck were more than capable of crafting an album that bent to their whims.

This time around they’ve changed direction, and jettisoned the more obvious shoegaze markers (although there are still moments of hazy genius), and embraced the sounds of ’80s electro and pop. Additionally, the balance of the duo has altered significantly. Maria Lindén has taken the lead, and wrote, produced and mixed the album. Quite where Fredrick Balck fits in is anyone’s guess, but it seems fair to deduce that Chiaroscuro is fundamentally Lindén’s vision.

The title of the album is an Italian term that refers to the treatment of light and shade in painting and drawing. With this work exploring a range of emotions, I Break Horses have added music to that definition. Yet initially, it would appear that using an Italian term for “Icy” might have been more appropriate. You Burn is, musically at least, positively glacial, capable of administering freeze burns perhaps, but with its breathy vocals, pulsing synth, and clattering snare, this is the sound of desolation in the tundra. Faith ups the ante somewhat, and finds Lindén relocated in the club surrounded by brittle rave tunes threatening to swamp her vocals.

Ascension changes moods, with a delicate, gentle natured synth part leading the song. Lindén is in more uplifting mode, and the neatly shifting bassline injects a little warmth into proceedings.

Denial is perhaps the first true standout track. It embraces early ’80s synth-pop and gives it a little M83 twist hear and there (check out those drum fills). Musically it all feels rather positive, evoking early Madonna along the way. Lyrically, it’s a different story “fade out, cos you are dying” provides the shade to the musical light. Berceuse begins in ominous fashion, with a heartbeat bass drum pulse and a portentous bass hum. It’s all very ethereal, and Lindén’s vocal hangs in the air like a mist slowly encompassing a darkening landscape. It has moments of elegance, but is perhaps the only moment on the album where the coming together of conflicting elements results in an unfortunate cancelling out which renders the song ineffective.

Medicine Brush sets things back on track wonderfully. It calls to mind M83’s Oblivion soundtrack and hints of Katie Jane Garside; dark, spectral and apparently set in a not too distant Kubrickian future, where things are beautiful and dangerous.

Weigh True Words moves away from the soundscaping and back towards the ’80s and powerful synth led balladry. There are hints of Yello to be found in drums and percussion, and Vangelis is surely another obvious influence. But ultimately it all hinges on the emotional weight of Lindén’s vocals, which for once take centre stage, moving from the shadows and out into the light. As a result, it’s one of the most stunning moments on the album.

They close with Heart To Know, a song that in some ways harks back to their debut. It’s an epic eight minute electronic soundscape that by rights should only ever be heard in the majestic environs of a cathedral, ideally in space. It has the sound and feel of a heartbreaking eulogy accompanied on a church organ. Towards the end of the track, the keyboards crackle with a distortion that suggests they are disintegrating. Even this heavy hearted celebration has begun to decay.

It seems likely that those who discovered I Break Horses back in 2011 will initially be disappointed with Chiaroscuro, but it takes time for expectations to be put to one side and for it to unfurl properly. Yet when it does, it is truly wonderful.